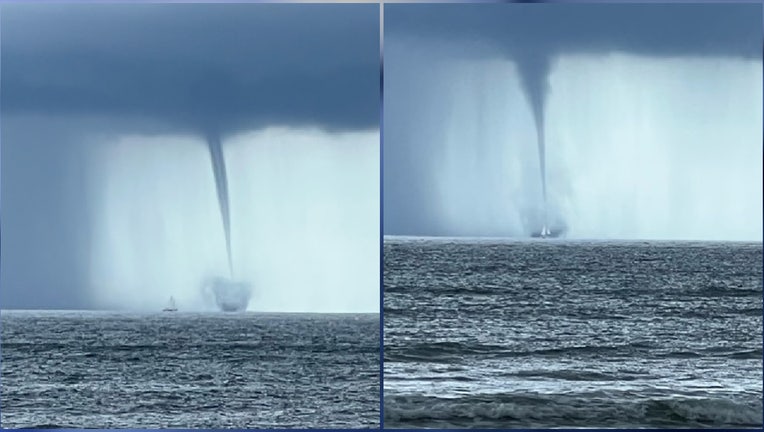 VOLUSIA COUNTY, Fla. - A waterspout appeared off the Volusia County coast near Daytona Beach and Ponce Inlet Sunday afternoon, according to the National Weather Service.

Shortly before 2 p.m., NWS officials said on Twitter they were monitoring the waterspout that ultimately remained over the waters. A Special Marine Warning was put in place from Flagler Beach to the Volusia Brevard County line once the waterspout was seen. The NWS said the waterspout ended at 2:04 p.m., allowing the warning to expire.

Williams Spears, a resident of New Smyrna Beach, shared photos with FOX 35 News of the waterspout he saw in the area around 1:30 p.m. In the photo, a sailboat appears to be near the waterspout's path.

Waterspouts are similar to tornadoes over water and are associated with severe thunderstorms, and are often accompanied by high winds and seas, large hail, and frequent dangerous lightning, according to the NWS. If a waterspout is spotted, the NWS said to immediately head at a 90-degree angle from the apparent motion of the waterspout.

Those who are out on the water when a waterspout appears should not navigate through it. Though waterspouts are generally weaker than tornadoes, NWS officials said they can still produce significant damage to people and boats.

There have been no confirmed reports of funnel clouds or tornadoes over land at this time.