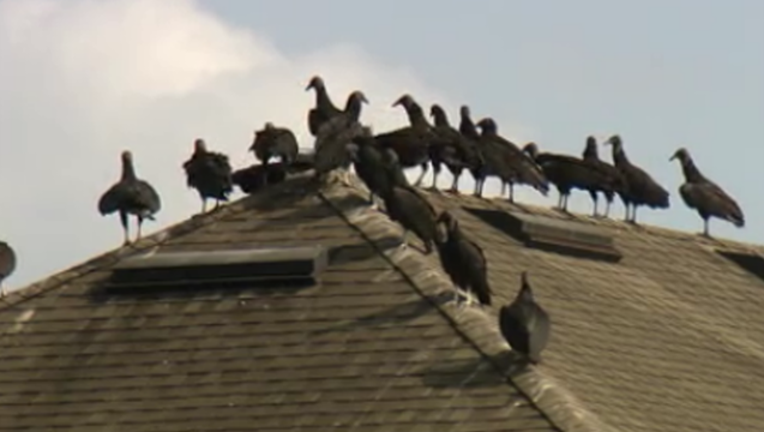 ORANGE COUNTY, Fla. (FOX 35 WOFL) - There’s a vulture problem in one Orange County neighborhood that has residents crying fowl. Thousands of dollars worth of damage to their homes and for now there is nothing they can do about it.

It’s like something out of an Alfred Hitchcock movie as dozens of black vultures descend on  homes in the Tudor Grove neighborhood of East Orange County.

“This is the damage that’s been done,” Clint Bonifay said while pointing to his pool screen.  “So you can see back on the pond there’s probably 50 of them out there right now.”

Bonifay said it would cost nearly two thousand dollars to repair his pool screen, but doesn’t want to fix it until the problem is gone.

“They start pecking in the corners and get it loose,” he said. “Once they stand on it. This one’s ripped right down the seam. It just starts to rip.”

“No one thinks it’s as bad as it really is, or that it’s caused this much damage,” Bonifay said.

Looking around the neighborhood, other homes have similar damage.

Some neighbors try to make loud noises to scare off the vultures, but they said the birds just keep coming back - and that their presence seems to be growing.

So why are they there? There’s no answer for now. Neighbors haven’t noticed them hunting, just drinking from the pond and sunning their feathers.

“If there was an alligator, they would come catch him and relocate him, but I guess they don’t do that with these animals,” Bonifay said.  “We just have to live with the mess.”

A mess that continues to get worse.