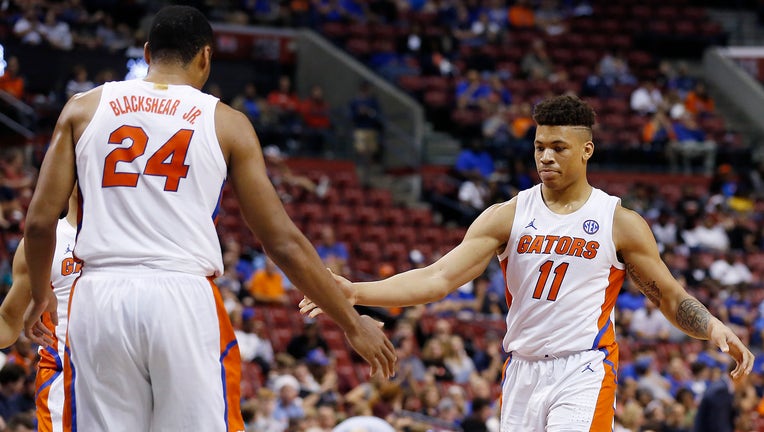 Kerry Blackshear Jr. #24 of the Florida Gators celebrates with Keyontae Johnson #11 against the Utah State Aggies during the second half of the Orange Bowl Basketball Classic at BB&T Center on December 21, 2019 in Sunrise, Florida. (Photo by Mich

They cited the circumstances following Keyontae Johnson's collapse over the weekend as the reason. During Saturday's game against Florida State, the star player collapsed. He has been transferred from Tallahassee Memorial to UF Health in Gainesville but remains in critical but stable condition.

A makeup date will reportedly be determined at a later time.

"Florida basketball and the UAA wish to thank UNF's coaching staff, administration and team for their flexibility and willingness to make this schedule change," the University Athletic Association said in a statement released Tuesday morning.

Johnson is said to be undergoing further tests. He was able to follow simple commands on Monday. Prior to this, his grandfather was quoted saying he had been in a medically induced coma.

The Florida Gators basketball team said that those wishing to send letters or cards to the Johnson family can send them to PO Box 14485, Gainesville, FL, 32604.