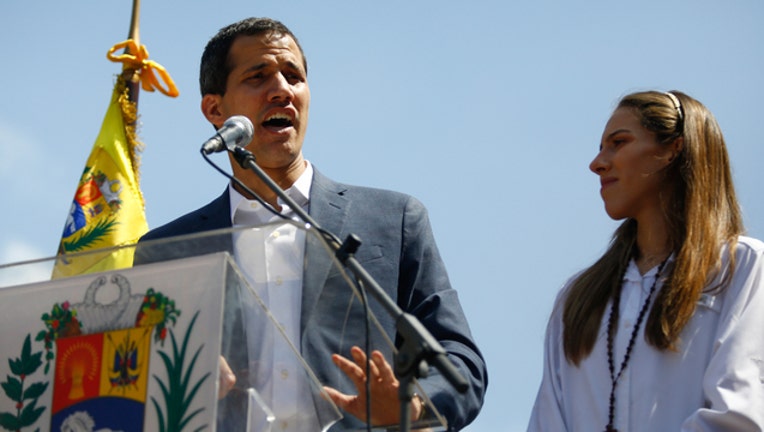 Opposition leader and self-proclaimed interim president of Venezuela Juan Guaidó talks, next to his wife Fabiana Rosales, during a rally against the government of Nicolás Maduro on Feb. 2, 2019 in Caracas. (Photo by Marco Bello/Getty Images)

WEST PALM BEACH, Fla. (AP) - President Donald Trump said Monday that "a new day is coming in Latin America," as he sought to rally support among the largest Venezuelan community in the U.S. for opposition leader Juan Guaido.

Speaking at Florida International University in Miami before large American and Venezuelan flags, Trump said the U.S. stands behind Guaido, whom the U.S. recognizes as the country's rightful president, and condemns President Nicolas Maduro's government and its socialist policies.

As the monthslong political crisis stretched on, Trump delivered a public plea to Venezuela's military to support Guaido's government. The Venezuelan military could play a decisive role in the stalemate but has largely remained loyal to Maduro.

Trump issued a dire warning to Venezuela's military that if they continue to stand with Maduro, "you will find no safe harbor, no easy exit and no way out. You will lose everything."

Trump added: "We seek a peaceful transition of power, but all options are open."

The military has blocked the U.S. from moving tons of humanitarian aid airlifted in recent days to the Colombian border with Venezuela. The aid shipments have been meant in part to dramatize the hyperinflation and shortages of food and medicine that are gripping Venezuela. Trump said of Maduro, "He would rather see his people starve than give them aid."

Venezuela's power struggle is headed to a potentially violent showdown Saturday, when Guaido will try to run caravans of U.S. humanitarian aid across the Venezuelan border from Colombia. Maduro denies a humanitarian crisis exists, blaming the Trump administration for mounting a coup against him.

More than two million Venezuelans have fled the country in the last two years, most flooding across the border into Colombia, Brazil and Peru. Those left behind struggle to afford scarce supplies of food and medicine as inflation soars.

Maduro maintains support from Russia, China and Turkey, while Guaido has won recognition from dozens of world leaders in Latin America and Europe, who are demanding that Maduro holds new elections or steps down.

So far, Maduro isn't budging. In a recent interview with The Associated Press, Maduro said Venezuela is ready to make an economic rebound once Trump removes his "infected hand" from the country that sits atop the world's largest petroleum reserves.

Trump urged the Venezuelan military to accept Guaido's offer of amnesty and refrain from violence against those opposing Maduro's government. And he praised the Venezuelan opposition, saying of the people of Venezuela, "They are turning the page on dictatorship and there will be no going back."

White House press secretary Sarah Sanders said earlier Monday that the U.S. "knows where military officials and their families have money hidden throughout the world."

South Florida is home to more than 100,000 Venezuelans and Venezuelan-Americans, the largest concentration in the country. Speaking in the presidential battleground state, Trump also sought to draw a contrast with the policies of progressive Democrats, which he brands as "socialist," as he gears up for re-election.

Trump said that "Socialism has so completely ravaged" Venezuela "that even the world's largest reserves of oil are not enough to keep the lights on." He added: "This will never happen to us."

"Socialism promises prosperity, but it delivers poverty," he said.

Trump was introduced by first lady Melania Trump and joined by Commerce Secretary Wilbur Ross, Florida Gov. Ron DeSantis and Florida Sens. Marco Rubio and Rick Scott, who have all been outspoken in their criticism of Maduro's government. Trump also spoke of the socialist governments in Cuba and Nicaragua, which have large expatriate communities in the Miami area.

"Socialism is dying and liberty, prosperity and democracy are being reborn" throughout the hemisphere, Trump said, expressing hope that soon, "This will become the first free hemisphere in all of human history."

Shortly after Trump ended his speech, he tweeted, "I ask every member of the Maduro regime: End this nightmare of poverty, hunger and death. LET YOUR PEOPLE GO. Set your country free! Now is the time for all Venezuelan Patriots to act together, as one united people. Nothing could be better for the future of Venezuela!"

Guaido addressed the crowd in a pre-recorded video released by the White House and thanked Trump and the state of Florida for their support.

"Now there is a debate between the democracy and dictatorship — one between life and death," Guaido said in Spanish. "Today this fight is existential."

Trump said the U.S. is "profoundly grateful" to dissidents and exiles who have protested and raised alarms about the actions of the Maduro government. But his administration has also come under criticism for not doing enough to grant asylum to those fleeing the country.

"President Trump is two-faced on the Venezuela issue," said Florida Democratic Party Chairwoman Terrie Rizzo. "He talks about fighting the Maduro regime, but his administration keeps deporting and detaining Venezuelans fleeing repression from the Maduro regime."

Trump had been spending the holiday weekend at his private club in West Palm Beach, Florida.