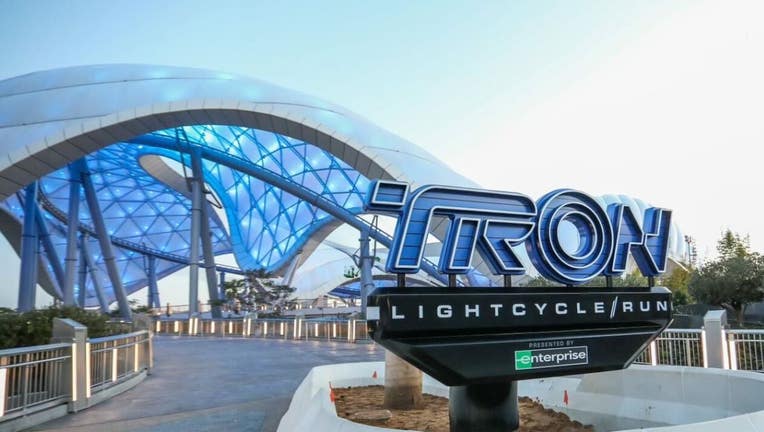 ORLANDO, Fla. - The highly anticipated opening of TRON Lightcycle / Run at Walt Disney World is just a couple of months away and the entrance sign for the attraction is in place!

Disney Parks Blog tweeted a photo of the sign that now sits outside the ride, which opens on April 4 at Magic Kingdom Park in Orlando, Florida. The sign was installed on Tuesday morning.

"Attention Users: This morning Imagineers installed the marquee for TRON Lightcycle / Run at Magic Kingdom Park, as work continues ahead of the attraction opening on April 4. We can’t wait for you to enter the Grid."

Earlier this month, Disney had tweeted cryptic social media videos hinting at the anticipated opening date for the new roller coaster. The first video showed a video game scoreboard with the caption "Need a Clu?" (For those not familiar with the TRON films, Clu is Jeff Bridges character in the Sci-Fi movies). The scores appear to represent important dates related to Disney and the TRON franchise.

A second video was then revealed with the TRON lightcycles spelling out the number 4 twice. Hours later, it was announced that the ride will open on April 4, 2023.

The story of TRON Lightcycle / Run picks up after ‘TRON: Legacy’ where Kevin’s son, Sam Flynn, has opened a second gateway into a digital realm known as the Grid.

According to Disney Parks Blog, "The first of these portals he created is found at Shanghai Disneyland with the original TRON Lightcycle Power Run."

Once guests enter the queue line, Disney says they'll feel as if they're digitized and transported to the Grid for a special Lightcycle race.

On April 4, guests will enter the Grid and climb aboard their very own lightcycles on TRON Lightcycle / Run, one of the fastest coasters in any Disney park. As part of Team Blue, guests compete against fierce Team Orange to be the first to race through eight Energy Gates in a dark, computerized world.

"It’s your Team Blue against the Grid’s menacing Programs, Team Orange. Your goal is to be the first to race through eight Energy Gates and secure victory. The attraction will be one of the fastest coasters at any Disney theme park in the world."

The TRON ride was first announced in 2017 during the Walt Disney World Parks and Resorts presentation at the D23 Expo. Theme park officials had originally planned to have the ride ready to open in time for Walt Disney World's 50th anniversary in 2021.

Six years later, TRON Lightcycle / Run will open next to Space Mountain in Tomorrowland. The theme park says it will be one of the fastest coasters at any Disney theme park in the world.

According to the Disney Parks Blog, cast members will be the first to enter the Grid during special previews, followed by some preview opportunities for Annual Passholders and Disney Vacation Club Members. Details on those events will be announced at a later date.