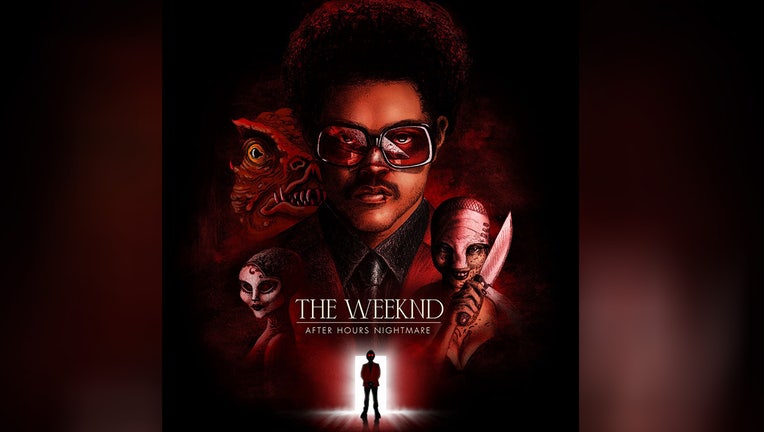 ORLANDO, Fla. - The rumors are true: a haunted house based on superstar artist The Weeknd's record-breaking "After Hours" album is coming to Halloween Horror Nights at Universal Orlando this year.

"The Weeknd: After Hours Nightmare" will be based on his record-breaking album, according to Universal Orlando, that will feature select tracks that will be reimagined as a horror movie soundtrack.

As guests make their way through the house, Universal says that they'll step into "a surreal living nightmare filled with grotesque characters and themes inspired by The Weeknd’s music and short films."

"As they’re stalked by slashers, bandaged maniacs, gruesome toad-like creatures and other unfathomable horrors from the mind of the artist, guests will be challenged to survive the night while trapped within the terrifying, unexpected world of "The Weeknd: After Hours Nightmare" – a place that only exists in The Weeknd’s vivid imagination and from which one may never escape."

Back in March, The Weeknd hinted at a possible collaboration with the annual Halloween event by responding with emoji's to a tweet from Horror Night Nightmares that read, "But The Weeknd isn't horror." The multi-award winning artist says he's thrilled to be a part of the popular scare fest.

"I always wanted my own Halloween Horror Nights haunted house as Halloween has always been significant to my music, so this is a total dream come to life," The Weeknd said. "I feel like my music videos have served as a launching pad for a collaboration like this, and I cannot wait for people to experience this madness!"

"The Weeknd: After Hours Nightmare." is the fourth of 10 haunted houses to be announced for Universal Orlando's event. A house based on the Halloween films, "Universal Monsters: Legends Collide" featuring The Wolf Man, Dracula and The Mummy, and "The Horrors of Blumhouse" are also part of this year's scary lineup.