TAMPA, Fla. - An ICU nurse at Tampa General Hospital has been selected by the NFL to be one of the three honorary captains for the Super Bowl LV coin toss.

Suzie Dorner is the COVID ICU nurse manager at TGH, and has been at the hospital for more than eight years.

Dorner, who lost two of her grandparents to the pandemic, was chosen to represent the thousands of healthcare workers from across the country and the world who "have risked their own lives for the sake of our own," the NFL said.

Buccaneers legend Derrick Brooks surprised Dorner with the news of her selection.

"I'm so humbled and honored, I'm speechless," Dorner told Brooks, adding that the past 11 months have been rough for frontline workers.

"It's been my first year as a nurse manager too," she said. "It's been very hard to lead the team through this pandemic."

The first time we met Dorner was back in November. The nurse had taken part in the hospital’s "COVID Chronicles" to illustrate what was going on inside of her ICU unit.

What made 2020 worse, she says, was losing both of her grandmothers, one of whom inspired her to become a nurse.

"She was actually a nurse during World War II, and she was very influential," Dorner said. "You know, I was always inspired by her growing up. So it was definitely hard to lose both of them, and especially because I couldn’t be there to say my goodbyes to either of them."

It’s a heaviness she’s felt a lot the past 12 months, but one that will be lifted for at least one day as she takes the field.

"I’m excited to take in this experience, and really enjoy the game and take that day as a break from COVID and really try and enjoy it." 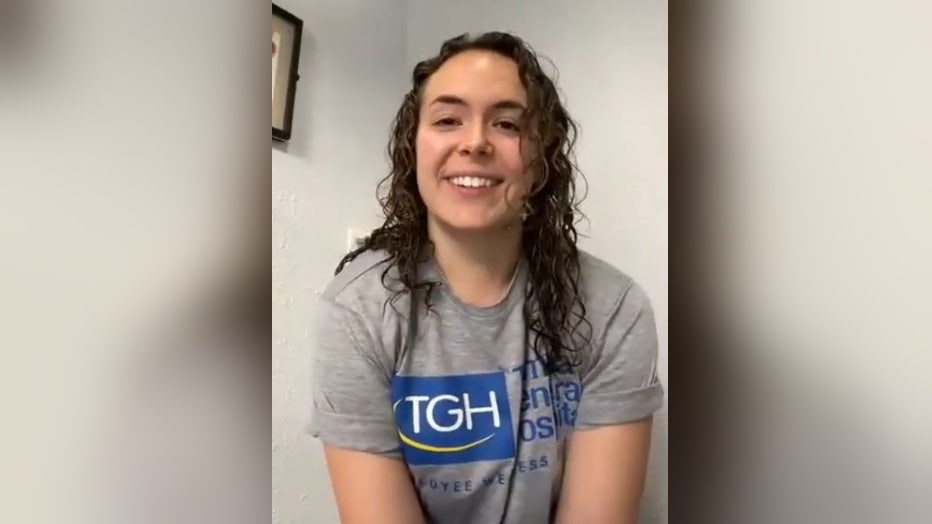 Educator Trimaine Davis from California was also chosen as an honorary captain, along with Marine Corps veteran James Martin from Pennsylvania.

Davis was recognized for helping students get hotspots, laptops and tablets so they could learn remotely. Martin helped connect more than 1,800 veterans with their families virtually with livestreaming, and opened his home to needy kids in his neighborhood.

NFL Commissioner Roger Goodell said Dorner, Davis and Martin were selected because they were leaders in their communities during the pandemic.

"We are honored to recognize these three individuals who represent the best in all of us," Goodell said in a statement. "During this incredibly challenging time in our lives, Trimaine, Suzie, and James have exemplified the essence of leadership."

As honorary captains, the three will participate in the official on-field coin toss ceremony during Super Bowl LV at Raymond James Stadium.

The NFL has asked Amanda Gorman, the young poet laureate who gained further notoriety for her poem during President Joe Biden’s inauguration, to compose a poem in their honor.