Teen slashed in face with knife by stranger

A 15-year-old boy was the victim of a random attack, after police said he was slashed by a knife-wielding man.

ORANGE CITY, Fla. - A teen in Orange City was slashed in the face over the weekend. Officers say a stranger did it.

The father of that 15-year-old boy says that he’s in good spirits all things considered. He’s out of the hospital, but he had 43 stitches. Now, his father is concerned about the trauma that he faces long-term.

"It was his jawbone, but it could have easily been his throat."

Police say the teen was slashed in the face by a stranger while walking home from a park in Orange City. 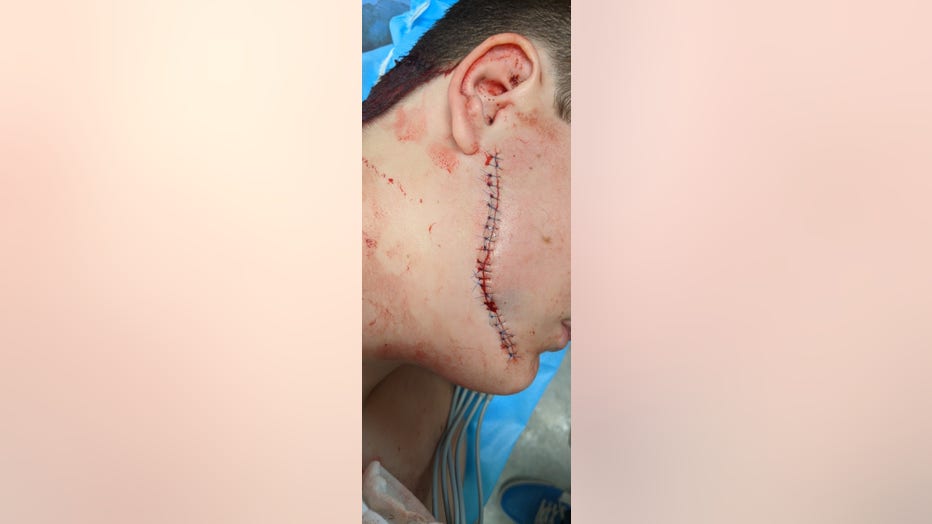 "He said he felt like he was hit. Person came around him. He was taller than him. And so he just grabbed his face and he ran here and it obviously turned out he had been cut," said the teen's father, Michael Benson.

Benson is still shocked over what happened.

Police say a roughly six-foot-tall Black man in his 20s attacked the teen on Oak Avenue, Saturday, and then ran off. The teen was coming from playing basketball at Mill Lake Park.

Surveillance video from a nearby dentist's office shows the boy holding his face on the way home.

"He doesn’t know anyone here. He’s a shy kid. He stays to himself. He goes and plays ball so it’s just inexplicable," Benson said.

Officers are looking for more surveillance and anyone who may have seen what happened.

"We really want to find out who this person is and get them off the streets," said Orange City Police Detective Sherif El-Shami.

The 15-year-old is out of the hospital, but his father says he lost a lot of blood and he's concerned.

"He’s holding it strong, but now we’re just trying to figure out the psychological aspect of what we’re going to need to do to support him."

He wants to warn other parents and teens in the area.

"To be this close to downtown, broad daylight, with a knife, with a blade, I think someone that’s capable of that would be beyond the reach of words."

Orange City police are now looking for the person who did this, telling people in the area to stay vigilant and report anything suspicious.