A Central Florida family said a complete stranger handed them a $500 gift card at Publix.

LEESBURG, Fla. - An angel in the grocery store.

A local family says a complete stranger handed them a $500 gift card.

Jamar Hall was just walking through Publix last week with his 2-year-old son, Junior, when he said: "Out of nowhere appeared this lady. I don’t know her. I’ve seen her. Never met her."

She kneeled down and gave his son an envelope.

Inside was a gift card to Publix for $500, with the receipt to prove it and a note from "Dave and Lisa".

"We hope that this gift card will make life a bit easier during these difficult times," the card read.

"It was an amazing feeling. She was like an angel in disguise," Hall said.

Hall was on a mission to find the woman inside the store and thank her.

"I walked the store like three times. One of the workers thought I was crazy," he said. 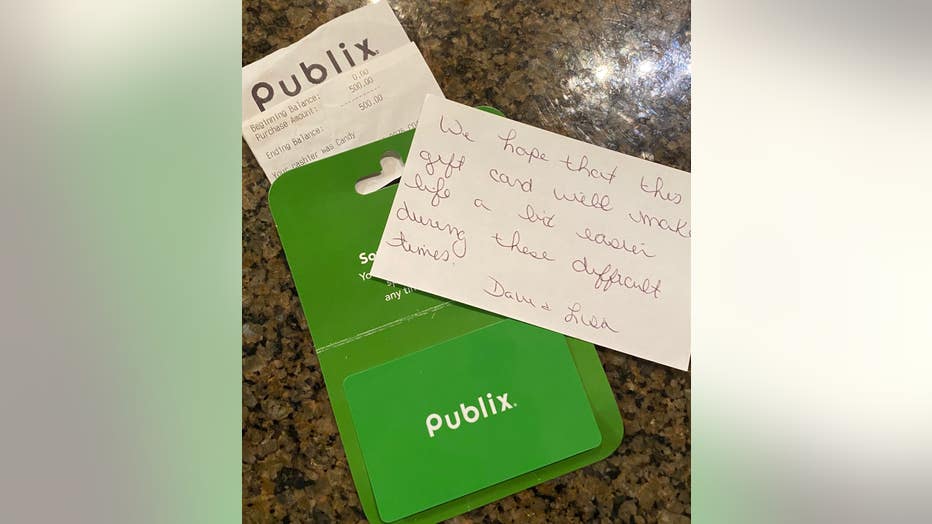 But he had no luck.

He's not sure why she gave them the gift card, but he was wearing his scrubs that day.

Hall works at Lifestream Behavioral Center in Leesburg, pulling 16-hour shifts since the pandemic took over.

He has a wife and three kids at home.

"We went through a lot these last couple of months so it really helped us out a lot," Hall said.

He still doesn't know who Dave and Lisa are, but he knows what they mean to him and his family.

"Thank you. Thanks for giving us hope and knowing that there’s still good people out there," he said.