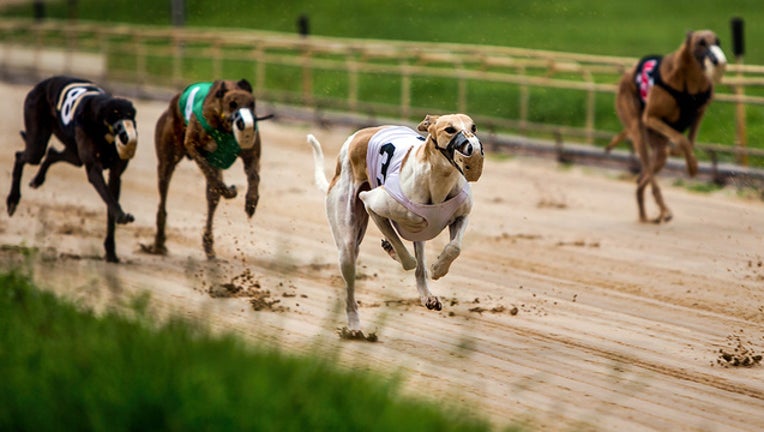 Greyhounds race by at the Sanford Orlando Kennel Club in Longwood, FL on Thursday, July 26, 2018. (Photo by Scott McIntyre For The Washington Post via Getty Images)

TALLAHASSEE, Fla. (NSF) - Alleging an unconstitutional “taking” of property, a Pinellas County greyhound-kennel owner has filed a lawsuit against the state because of a dog racing ban approved by voters in November.

Christopher D’Arcy, owner of D’Arcy Kennel LLC in St. Petersburg, wants a judge to order the state to pay damages for the loss of value of his property, including racing dogs that the lawsuit said could previously be sold for up to $50,000. Voters in November approved a constitutional amendment, known as Amendment 13, that will shut down Florida’s decades-old greyhound racing industry by a Dec. 31, 2020 deadline.

“The state of Florida, through Amendment 13, imposed such a severe burden on the private property rights of plaintiffs (D’Arcy and the kennel) that it amounts to a per se taking that completely deprives plaintiffs of all economically beneficial use of the property,” said the lawsuit, filed in Leon County circuit court. “The adoption of Amendment 13 is the functional equivalent to a physical taking in which the state of Florida has ousted the plaintiffs from their domain and from any benefit from their property.”

The lawsuit was announced Monday by the Florida Greyhound Association, an industry group that fought the constitutional amendment, which came after years of calls by animal-rights groups to ban dog racing in the state. The measure easily passed, with support of 69 percent of the voters.

The Florida Greyhound Association went to court last year in an unsuccessful attempt to keep the constitutional amendment off the ballot. The new lawsuit does not try to overturn the amendment but seeks damages under the Florida Constitution and the U.S. Constitution. It makes a claim for what is known as “inverse condemnation” and contends that the amendment was a “taking” of property without compensation.

While greyhound tracks face a Dec. 31, 2020, deadline for ending racing, they were able to stop racing at the beginning of this year. In the past, tracks had been required to run races to offer more-lucrative types of gambling, such as card rooms.

Carey Theil, executive director of the group GREY2K USA, which helped lead efforts to pass the constitutional amendment, said 11 tracks had racing when the amendment passed. He said seven continue to run races, while four have stopped.

The D’Arcy lawsuit comes about six years after a state appeals court sided with a Northwest Florida farmer in an inverse-condemnation case that stemmed from a 2002 constitutional amendment that banned gestation crates for pigs, a measure that became widely known as the “pregnant pig” amendment.

A panel of the 1st District Court of Appeal upheld a Jackson County circuit judge’s ruling that awarded more than $500,000 to farmer Stephen Basford, who reportedly was one of only two Florida farmers who used the controversial pig-farming technique that was banned by the constitutional amendment. The appeals-court majority noted that its decision was narrowly tailored to the issues in the Basford case, such as barns, wells and a feed mill not being able to be used for other purposes.

Christine Dorchak, president and general counsel of GREY2K USA, disputed the arguments raised in the D’Arcy lawsuit and said the kennel owner is not owed compensation.

“No property is taken under Amendment 13, and this humane law simply phases out an industry that is cruel and inhumane,” Dorchak said in an emailed statement. “Unlike the pig farmer who could no longer use his gestation crates at all, the track land and the dogs themselves retain value.”

In announcing the lawsuit, however, the Florida Greyhound Association said issues raised by D’Arcy also could apply to other members of the association.

“Our goal would be to sit down with the state and work out some kind of system that would fairly compensate these people,” Hawkes said. “They were lawfully engaged in a business that Florida used to depend on critically to fund their budget.”