The study's findings reflect a growing global trend of plummeting insect numbers and suggest that the decline is happening more quickly and extensively than previously thought.

MUNICH - Insect and spider populations are falling dramatically across the globe, spurring concern throughout the scientific community, and a new study suggests that the decline may be happening more quickly and extensively than previously suspected.

While those who squirm at the thought of creepy-crawlies might delight in such a discovery, this could be seriously bad news for humanity. As the United Nations Environment Programme put it in a report earlier this year, “Many people think of insects as a nuisance. They don’t realize that without them we are doomed.”

The most recent study was conducted by an international research team led by scientists at the Technical University of Munich (TUM). Researchers monitored insect populations across Germany over a 10-year period and noted significant and troubling decreases in both biomass (the total mass of organisms in a given area) and diversity of insect species.

They found that the number of species present in forests and grasslands had dipped by about one-third, or 33 percent, and that there was also an overall decrease in the number of insects and spiders in all regions.

Their findings were recently published in the journal Nature.

"Previous studies... either focused exclusively on biomass, i.e. the total weight of all insects, or on individual species or species groups. The fact that a large part of all insect groups is actually affected has not been clear so far," says Dr. Sebastian Seibold, a scientist with the Terrestrial Ecology Research Group at TUM.

To analyze the overall change to insect and spider populations over time, researchers collected more than one million insects representing about 2,700 species from 150 grassland and 140 forest sites in Germany between 2008-2017.

They were able to prove that many of the approximately 2,700 investigated species are in decline, and some of the more rare species have disappeared from certain regions altogether.

Grasslands and forests experienced comparable losses in diversity of species; scientists counted about one-third less insect species across both region types after 10 years.

"Before our survey it was unclear whether and to what extent forests were affected by the insect decline as well," said Seibold.

At the end of the study, researchers confirmed that forests were being affected quite extensively — they measured a decrease of approximately 40 percent in insect biomass in the forests sites studied.

The loss in grasslands was even worse. By the end of the study, the insect biomass at grassland sites decreased to only one third of its former level.

In annually sampled grasslands, biomass decreased by 67 percent, abundance decreased by 78 percent and number of species declined by 34 percent. "A decline on that scale over a period of just 10 years came as a complete surprise to us – it is frightening, but fits the picture presented in a growing number of studies," says Wolfgang Weisser, professor of Terrestrial Ecology at TUM and a co-initiator of the cooperative project. 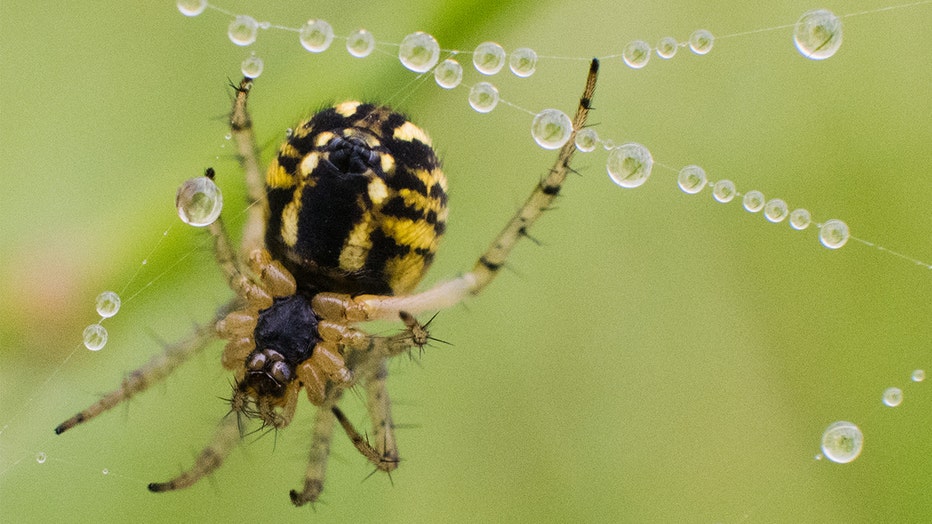 A spider sits in a web which is covered in morning dew near Sehnde, Germany, 02 June 2016. In the past decade, spider and insect populations across the country have dropped dramatically. (Julian Stratenschulte/picture alliance via Getty Images)

The sites studied included sheep pastures, meadows that are mowed and fertilized three to four times per year, forestry dominated coniferous forests and even unused forests in protected areas.

The greatest losses noted by researchers were in grasslands surrounded by intensively farmed land, and the most heavily impacted species in these regions were those that are unable to travel far.

In stark contrast, the insects most affected in forest regions are those that cover long distances.

"To decide whether it is a matter of the more mobile forest-dwelling species having more contact with agriculture, or whether it has something to do with living conditions in the forests, further study will be needed," said the former TUM researcher Dr. Martin Gossner.

The findings of the study aren’t relevant just to Germany, they reflect a larger global trend in plummeting arthropod (insect and spider) numbers, the shocking extent of which was summarized by a 2014 study published in the journal Science.That study was lead by Rodolfo Dirzo, an ecologist at Stanford University, who developed a global index for invertebrate abundance which measured a 45 percent decline over the past 40 years.

When insect populations dwindle, it affects the entire food chain and also significantly impacts ecological systems, such as in the case of pollinators disappearing from landscapes where plants rely on insects to reproduce. A decline in numbers of pollinating insects in areas with intensive industrialized agriculture will also affect the crops that humans rely on for food.

Across many studies, several culprits are consistently cited as the cause for these declines, most notable are the pervasive use of pesticides, urbanization, habitat destruction and the spread of monoculture crops (where only one single crop species is cultivated in a field or farming system at a time) such as soybeans and corn.

“I suspect it is a multiplicity of factors,” Dirzo, the author of the 2014 study, told the Yale School of Forestry and Environmental Studies, “Most likely with habitat destruction, deforestation, fragmentation, urbanization, and agricultural conversion being the leading factors.”

Authors of the TUM study of German insect populations say that a large-scale, multi-regional and multi-national approach will be necessary to effectively address and hopefully reverse plummeting insect populations.

"Current initiatives to address insect losses are overly concerned with the cultivation of individual plots of land and operate independently of one another for the most part," said Seibold. "To stop the decline, however, our results indicate that more coordination is needed at the regional and national levels."