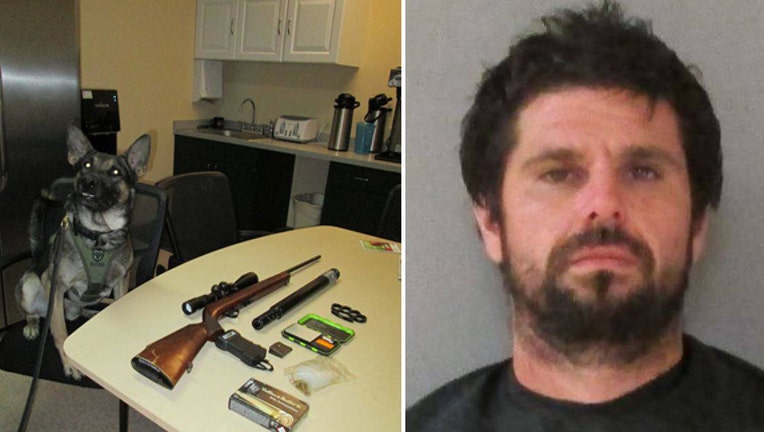 The new recruit to the Flagler County Sheriff's Office just made his first arrest -- a convicted sex offender armed with weapons, ammo, and drugs, deputies said in a press release.

"Raymond is no stranger to law enforcement and has multiple felony convictions for burglaries and grand theft," the sheriff's office said. "Raymond is also a known sex offender. Additionally, Raymond is currently out on felony bond for an active case in Flagler County for failure to register as a sex offender."

K-9 Axle conducted an exterior sniff of the vehicle and trailer. During the exterior sniff, Axle alerted his handler, Deputy Beausoleil to the odor of narcotics.

During the search, the sheriff's office said they found the following:

"When questioned by deputies Raymond stated that the rifle belonged to his grandfather and accused a male known only to him as 'Archie' of 'planting' the firearm in his vehicle to get him in trouble."

“This is another great example of good police work from a minor traffic stop,” Sheriff Rick Staly said. “Deputies never really know what they are walking into when they conduct a traffic stop. Here we had something that could have been a simple warning for a broken brake light but it turned into multiple felony charges, more poison off our streets and a sex offender back in jail. Who knows what other crimes this traffic stop may have prevented? I am extremely proud of our newest K-9 Axle who just graduated and is already getting bad guys off the street. K-9 Axle gets a special treat!”