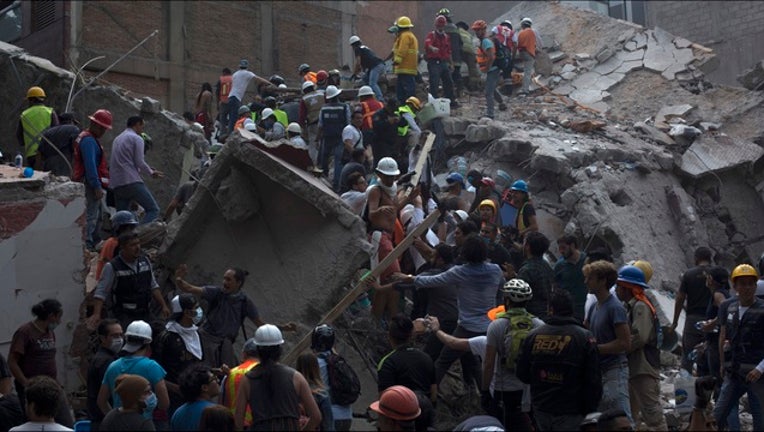 Rescuers work in the rubble after a magnitude 7.1 earthquake struck on September 19. The earthquake caused multiple fatalities, destroyed buildings and knocked out power throughout the capital. (Photo by Rafael S. Fabres/Getty Images)

MEXICO CITY (AP) - The three-story school structure had pancaked into a pile of concrete slabs. The bodies of 21 children and four adults had been pulled out. But still sounds came from the collapsed structure early Wednesday - nobody knew if they were survivors pounding for help, or simply the noises of shifting rubble.

After a wing of the Enrique Rebsamen primary and secondary school collapsed in Tuesday's magnitude-7.1 earthquake, rescuers dug at the pile of rubble and soldiers wedged in wooden beams to try to prevent it from crumbling further.

Pedro Serrano, a 29-year-old doctor, was one of the ordinary Mexicans who had volunteered to join the rescue effort. He crawled into a crevice amid the tottering pile.

"We dug holes, then crawled in on our bellies," Serrano said.

With barely room to move, he wriggled deeper into the wrecked school.

"We managed to get into a collapsed classroom. We saw some chairs and wooden tables," Serrano said. "The next thing we saw was a leg, and then we started to move rubble and we found a girl and two adults - a woman and a man."

None of them was alive.

The rescuers left them there. There was no way to get them out.

Outside the school gates, rumors ran through the crowd of anxious parents that two families had received Whatsapp messages from girls trapped inside. Nobody could say for sure whether it was true.

Asked if there was hope, Serrano looked weary but said workers were still trying.

"We can hear small noises," he said. "We don't know if they're coming from above or below - from the walls above (crumbling), or from someone below calling for help."

The work continued through the night, as pickup trucks loaded with volunteer rescuers with shovels and pickaxes sped through the darkened streets of the capital.

Occasionally, searchers at the school would ask for silence so they could listen for signs of life.

Silently, they held their fists in the air in a gesture of hope, solidarity and resilience.