A weapons manufacturer in Cocoa, Florida recently shipped out 400 guns to Ukraine to help the people there following the invasion from Russia.

COCOA, Fla. - A weapons manufacturer in Cocoa, Florida recently shipped out 400 guns to Ukraine to help the people there following the invasion from Russia.

"The guns we sent to Ukraine are this exact variant, actually. It’s called a Sub2000 Rifle. It takes Glock magazines, and it’s a pistol-caliber carbine. The ones we sent are 9mm.  It’s very common ammo," said Chad Enos, a representative for KelTec.

Crews recently finished packaging and sent some $200,000 worth of guns to the country.

"The neat thing about this, unique thing about this -- is it folds in half so for people fleeing the country, it’s a nice option to put in a backpack, keep them out of sight. It doesn’t make them a target if they can secure it and conceal it," he said.

The shipment was supposed to be sold to a gun distributor, who they've been doing business with since 2015, but once the invasion started, they haven't been able to get in contact with them.

"They’re friends of ours, so we’re worried about them, their families," he said. Thankfully, they did eventually get in contact and let them know they are safe.

Like the rest of the world, Enos and the bosses at KelTec have been watching the war on TV. 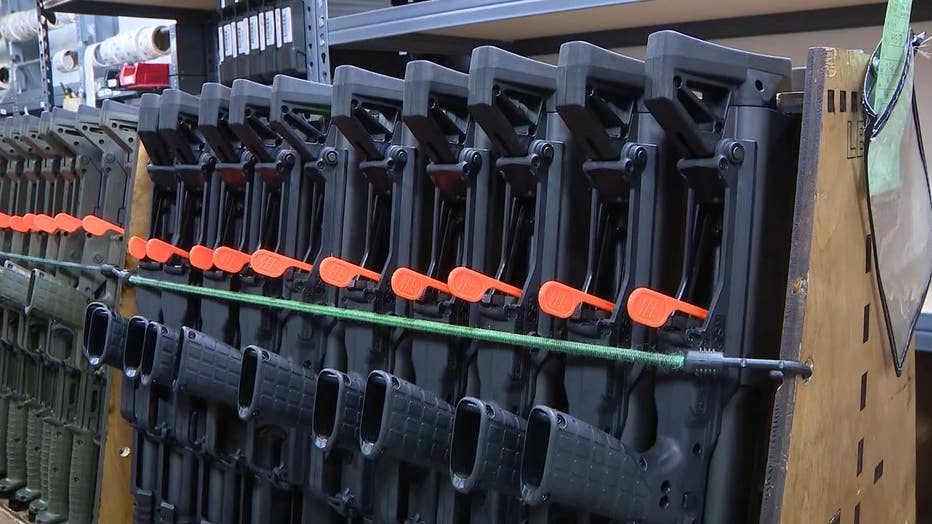 "We saw all the horror stories happening. Houses being bombed, and people being dragged out of their homes and sent off on trains," said Enos.

"We decided we would just go ahead and donate those weapons. So we found a contact at the ministry of defense in the Ukraine," Enos said.

Shipping the weapons out of the country isn’t easy.

Typically, the paperwork alone to renew the export license is a four-month process. But in this case, an official in Ukraine helped expedite the paperwork to be completed in four days.

"They’re very, very appreciative of all of this help that’s being sent over there right now because you can imagine it’s a dire situation," Enos said of the Ukrainian government.