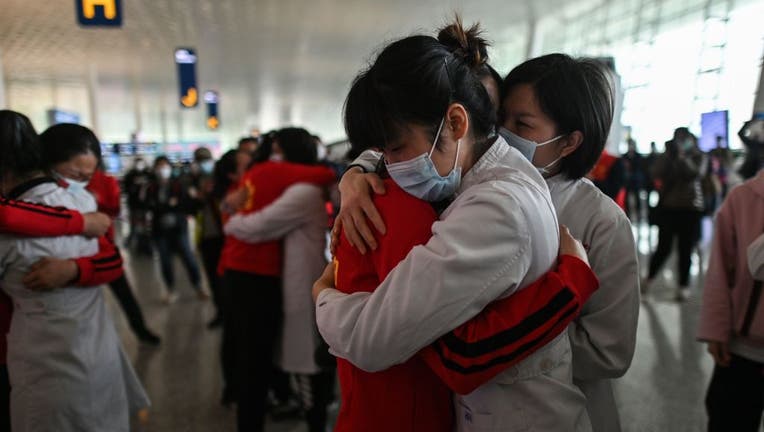 Medical staff from Jilin Province (in red) hug nurses from Wuhan after working together during the COVID-19 coronavirus outbreak during a ceremony before leaving as Tianhe Airport is reopened in Wuhan in China's central Hubei province on April 8, 202

The Department of Defense plans to fulfill a chilling request from the Federal Emergency Management Agency (FEMA) as the death toll from the coronavirus continue to grow: 100,000 body bags.

"DOD and the Defense Logistics Agency have a longstanding arrangement with FEMA to procure key commodities from DLA's industrial partners during crisis response operations,” a DOD spokesperson said in a statement. “DLA is currently responding to FEMA's prudent planning efforts for 100,000 pouches to address mortuary contingencies on behalf of state health agencies."

The Defense Logistics Agency – an agency within the DOD -- manages the “global supply chain” for the U.S. military, according to its website. FOX NEWS reports that the DOD will pull from its stockpile of 50,000 bags and plans to purchase more, according to Bloomberg.

The White House warned that even with social distancing protocols in place, 100,000 to 240,000 could die from the virus.

RELATED: Social distancing may be here to stay

“The surge is coming, and it’s coming pretty strong,” President Trump said in a White House press briefing. “It is absolutely critical for the American people to follow the guidelines. It’s a matter of life and death.”

According to Bloomberg, the body bags will give them to states that request them.

In New York, one of the hardest-hit areas, hospitals have been overwhelmed and have been forced to make makeshift mortuaries in refrigerated trucks.

Refrigerated trucks in hard-hit states like New York and New Jersey have been secured to help hold bodies because morgue space has run out in some areas, according to Bloomberg.

There are more than 1.4 million confirmed cases across the world and over 83,000 deaths, according to Johns Hopkins data.