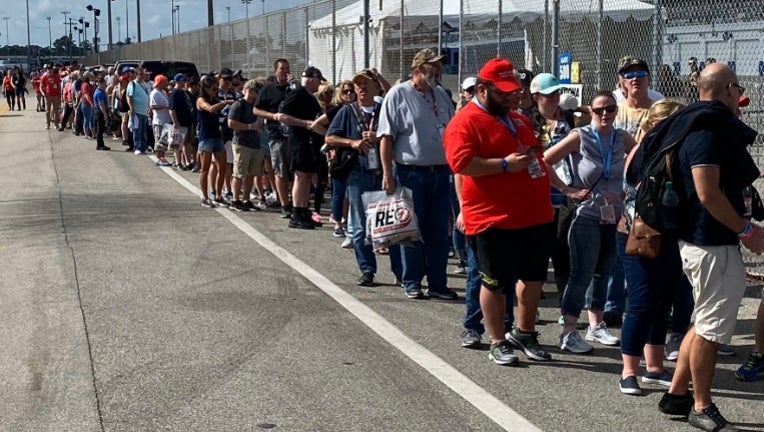 DAYTONA BEACH, Fla. - Ricky Stenhouse Jr. was wearing his firesuit and had just finished signing autographs for fans stuck in long lines to enter Daytona International Speedway when he was stopped by Secret Service. Not even the Daytona 500 pole-sitter was immune from the security checkpoint, so Stenhouse extended his arms, clutched his phone and stood still as a wand was waved around him.

His No. 1 starting spot secured, Stenhouse had to wait because of heightened security measures sparked by the arrival of No. 45: President Donald Trump became just the second sitting president to attend the Daytona 500 on Sunday.

Trump served as grand marshal for the race and gave the command for drivers to start their engines. The United States Air Force Thunderbirds performed a second flyover after Trump’s command. 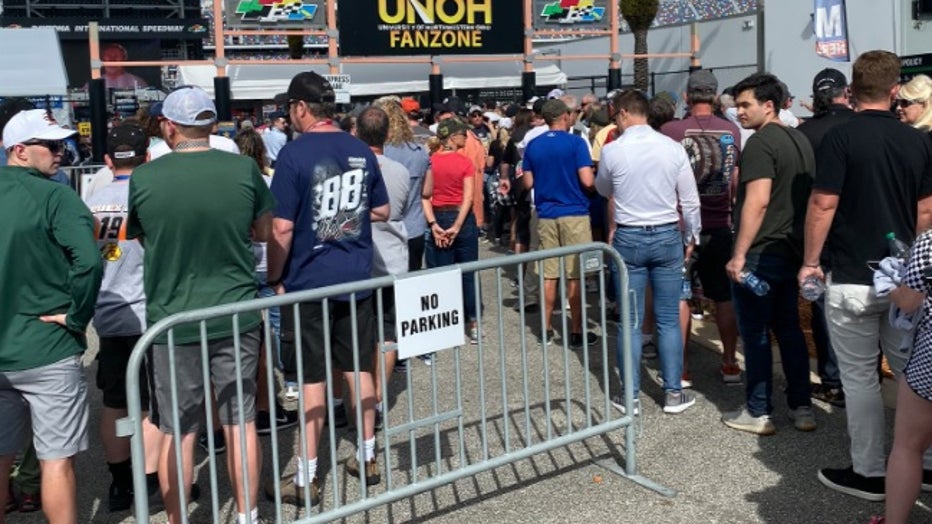 He also took a parade lap around the 2 1/2-mile speedway in his limousine, leading the 40-car field before the green flag. The presidential motorcade remained on the apron in the corners instead of taking to the high-banked turns.

Thousands cheered and a band played patriotic music when Air Force One flew over the famed track, a flyover that was simultaneously shown on big screens. Trump’s presence energized fans and caused big headaches because of logistical issues at entrance points. The superspeedway-sized lines spurred Stenhouse to perk up fans who helped sell out the Daytona 500 for the fifth straight year.

“I didn’t have anything to do because my appearances got moved around and I saw that line and I felt so bad for everybody out there having to wait,” Stenhouse told The Associated Press. “Everybody seemed patient and didn’t mind having to wait too much. The atmosphere was pretty good.”

Stenhouse will lead the field to green in the No. 47 Chevrolet. He told NASCAR vice chairman Mike Helton he hoped for a picture-perfect start: Stenhouse wanted to lead the race as Air Force One takes off for the presidential photo opp.

“That’s one of those things that everybody remembers,” Stenhouse said. “So I told him, ‘Man, I need to get my spotter to let me know when they are taxiing because it would be so cool to be leading the race as Air Force One is flying away.’ It’s a cool picture to have, even if you are not leading. It is going to be special for all of us involved.”

Trump, with first lady Melania Trump by his side, addressed the crowd before the race and called the Daytona 500 “a legendary display of roaring engines, soaring spirits and the American skill, speed and power that we’ve been hearing about for so many years.”

RELATED: Good Day Orlando at the track: Gearing up for the Daytona 500

Donald Trump Jr. and former NASCAR chairman Brian France, who recruited several drivers to attend a Georgia rally for Trump when he was a candidate, also were on Air Force One.

Hailie Deegan, billed as “NASCAR’s Next Big Superstar” before a pre-race autograph appearance, tweeted “Today’s goal. Get my helmet signed by Trump.” Donald Trump Jr. tweeted at her, “DM me... I may know someone.”

Deegan accomplished her goal and got the president’s autograph on her helmet.

For all the pomp, Trump’s arrival caused more jams around Daytona than a multi-car pileup on the frontstretch. Driver appearances were canceled or shuffled around to other areas on track property. The red carpet was rolled out for Trump and so was the green flag -- the start of the race was pushed back 13 minutes to accommodate his pace lap in the armored presidential limo called “The Beast.” Trump was named Daytona 500 grand marshal and gave the command for drivers to start their engines.

“Any time the President who runs your country is coming to a sporting event that you are involved in, it says a lot about the sporting event and how much this race means to everybody,” Stenhouse said. “You’ve got to respect the one that’s in charge.”

Daytona fans were largely enthusiastic over Trump’s cameo, wearing T-shirts, hats and some fans draped themselves in Trump 2020 banners that flowed like capes as they strolled the garage before the race.

The good times were dampened, though, near several gates as thousands of fans waited hours to get inside. The popular fan zone -- where fans can chug beers, listen to live music and purchase race merchandise — had waits of up to three hours to enter.

“We would like a refund,” said Kay Maiden, attending her first Daytona 500. “My feet are sore. I’ve been standing in that line for three hours. I paid $100 to stand in line for three hours, and that’s not a good thing. We got water, but there’s no place to go to the bathroom. It’s definitely very unorganized.”

There were enthusiastic “woo-hoos” and “we made it” yells once fans packed their bags and made it through security lines.

“This is really ridiculous,” said Carl Jacobi, of Texas. “All the people pay for this thing and it’s holding them up. We paid extra to get in here and we’re not getting to enjoy it.”

But once the Daytona diehards hit the fan zone, they were ready to cut loose.

“We’re in here now. We’re about to party and have fun,” Florida resident Kimberly Tarbes said.