The Pittie Party of Central Florida said that they got a call three weeks ago from a veterinarian's office asking for them to help the puppy.

ORLANDO, Fla. - When you look at that sweet face, it's hard to imagine anyone would want to hurt little Beans.

The 7-month-old puppy is in need of a loving home after a Central Florida rescue says he was burned and then thrown from a truck. The Pittie Party of Central Florida said that they got a call three weeks ago from a veterinarian's office asking for them to help the puppy.

"She said that a dog was brought to their facility, and it was in a bad shape, he was burned, and he was thrown out of a vehicle," Mayson Jones, the Assistant Director of the rescue, told FOX 35. The puppy, Beans, is said to be still healing from the "horror he recently went through."

He was reportedly covered in road rash and third-degree burns down his entire back. They believe he has chemical burns. He wears a shirt most of the time to keep him from scratching the scabs.

"He has pajamas that he wears at night so they won't come off," Alicia, who is now Beans' foster mom, said. Thankfully, the sweet and playful is on the mend. 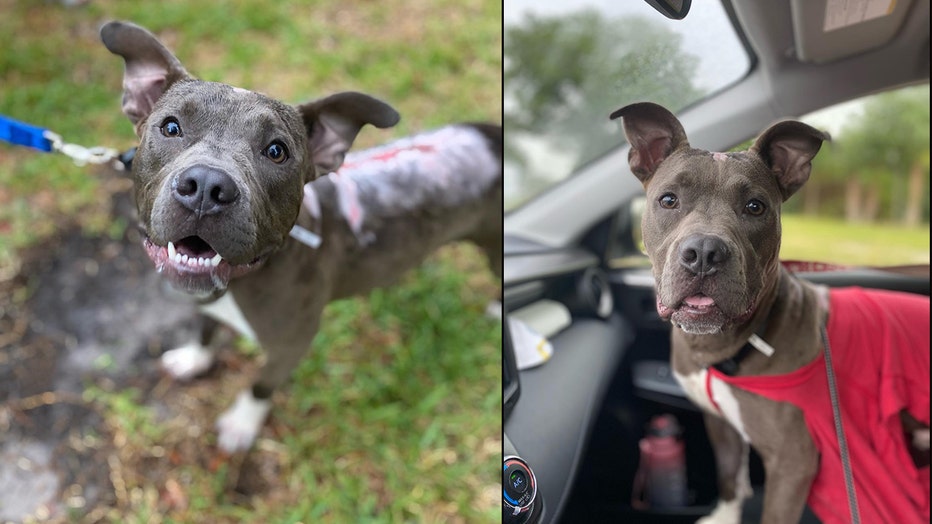 "He follows me around all the time," said 11-year-old Isaac Robertson. "Usually I play tug-of-war with him and his toy or I sit down and he'll watch a movie with me."

Beans is said to be very affectionate and loves people. 13-year-old Nariya Roberson told FOX 35 that, "I like how when you lay down, he doesn't just lay beside you. He tries to lay on top of you and cuddle."

The rescue added that the person who did this has not been found yet. For now, they are hoping to find Beans a forever home as he already has a foster mom.

As for the kind of family best for Beans, the rescue hopes to find someone who has time to spend with him since he is still a baby. They specifically stated they want "someone that likes to take him on walks and would play with him."

Thankfully, Beans is said to already be doing well with his potty training and will be good with other dogs or cats.

"Our rescue will provide you with all of the ongoing supplies. We cover all expenses associated with fostering and medical," the PIttie Party of Central Florida said.