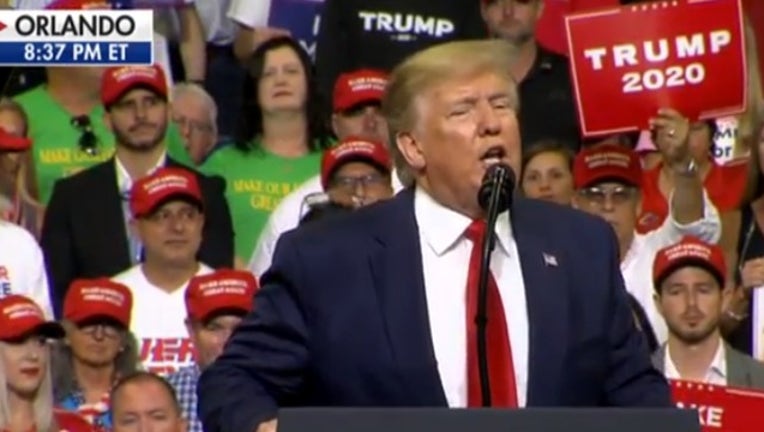 FOX NEWS - It's been years since President Trump rolled out his nickname for Hillary Clinton, but on Tuesday night he unveiled a potentially new impression of her.

Trump, speaking at his official campaign launch in Orlando, Florida, on Tuesday night, harkened back to a moment from the 2016 debates with "Crooked Hillary" when the Democratic candidate asked if he would accept the results of the election.

To the delight of the thousands in attendance, Trump mockingly asked the question in a voice -- seemingly debuting his "Hillary voice."

'​​​"You remember during one of the debates when 'Crooked Hillary' said 'If I win, are you going to support me?'  But I must be honest, I didn't give her a great answer," Trump said, using the former Secretary of State's voice. "That might have been my hardest question. During the debates. Isn't it amazing that it worked the other way around, right?"

The entertainer-in-chief had the Florida crowd in a frenzy as he described his analysis of Clinton and her email scandal, telling the crowd he would not get the same benefit of the doubt with one email deleted and compared the Russia investigation to Clinton's Benghazi investigation.

"If you want to know how the system is rigged, just compare how they came after us for three years with everything they had versus the free pass they gave to Hillary and her aides after they set up an illegal server, destroyed evidence, deleted and acid washed thirty-three thousand e-mails, exposed classified information and turned the State Department into a pay for play cash machine," Trump said working the crowd into a fervor.

"If I got a subpoena for e-mails if I deleted one e-mail. Like a love note to Melania it's the electric chair for Trump," the president joked.

Trump has shown he isn't afraid to go off script during his rallies and also takes pride in prodding his political rivals. He recently dubbed House Speaker Nancy Pelosi 'Nervous Nancy.'