On the third day of the Artemis I mission, Orion maneuvered its solar arrays and captured images of the moon with a camera mounted on the end of the array. The spacecraft was about halfway to the moon.

Orion launched Wednesday on the Space Launch System rocket at 1:47 a.m. Eastern, beginning its nearly 26-day test flight, known as the Artemis 1 mission, around the moon.  On the third day of the Artemis I mission, Orion maneuvered its solar arrays and captured images of the moon with a camera mounted on the end of the array. The spacecraft was about halfway to the moon.

NASA’s high-tech, automated Orion capsule is named after the constellation, among the night sky’s brightest. At 11 feet (3 meters) tall, it’s roomier than Apollo’s capsule, seating four astronauts instead of three.

For the test flight, a full-size dummy in an orange flight suit occupies the commander’s seat, rigged with vibration and acceleration sensors. Two other mannequins made of material simulating human tissue — heads and female torsos, but no limbs — measure cosmic radiation, one of the biggest risks of spaceflight.

Unlike the Artemis I Space Launch System (SLS) rocket, Orion has launched before, making two laps around Earth in 2014. For the test flight, the European Space Agency’s service module was attached for propulsion and solar power via four wings. 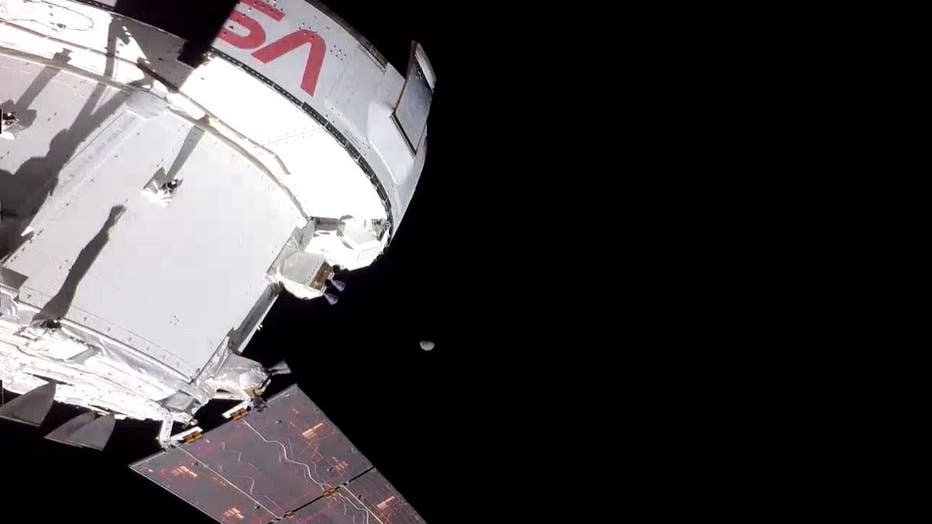 Orion will travel about 40,000 miles beyond the moon's far side, farther than any human-rated spacecraft. This lunar orbit is known as the distance retrograde orbit or DRO.  NASA's Artemis 1 spacecraft will orbit the moon for about six days before beginning the trip back to Earth.

NASA launched a website tracking Orion's whereabouts that shows how fast it's traveling, the position of the spacecraft and the distance to the moon and Earth.

Orion’s flight is set to last 25 days from its Florida liftoff to Pacific splashdown, about the same as astronaut trips. It takes nearly a week to reach the moon. After whipping closely around the moon, the capsule enters a distant orbit with a far point of close to 40,000 miles (64,000 kilometers). That would put Orion about 270, 000 miles (435,000) from Earth, farther than Apollo.

The big test comes at the mission’s end, as Orion hits the atmosphere at 25,000 mph (40,000 kph) on its way to a splashdown in the Pacific. The heat shield uses the same material as the Apollo capsules to withstand reentry temperatures of 5,000 degrees Fahrenheit (2,750 degrees Celsius). But the advanced design anticipates faster, hotter returns by future Mars crews.

Besides three test dummies, the test flight includes a slew of stowaways for deep space research. Ten shoebox-size satellites pop off once Orion is hurtling toward the moon. NASA expects some to fail, given the low-cost, high-risk nature of these mini-satellites. In a back-to-the-future salute, Orion carries a few slivers of moon rocks collected by Apollo 11’s Neil Armstrong and Buzz Aldrin in 1969, and a bolt from one of their rocket engines, salvaged from the sea a decade ago.

WHAT’S NEXT FOR NASA'S MOON MISSIONS?

There’s a lot more to be done before astronauts step on the moon again. A second test flight will send four astronauts around the moon and back, perhaps as early as 2024.

A year or so later, NASA aims to send another four up, with two of them touching down at the lunar south pole. Orion doesn’t come with its own lunar lander as the Apollo spacecraft did, so NASA has hired Elon Musk’s SpaceX to provide its Starship spacecraft for the first Artemis moon landing. Two other private companies are developing moonwalking suits.

The sci-fi-looking Starship would link up with Orion at the moon and take a pair of astronauts to the surface and back to the capsule for the ride home. So far, Starship has only soared six miles (10 kilometers).