There is a curfew in place on Sunday into Monday from 10 p.m. until 5 a.m.

ORLANDO, Fla. - Orange County Mayor Jerry Demings announced that he is enacting a curfew in unincorporated Orange County in response to the protests that took place on Saturday.

The curfew will run nightly between 10 p.m. and 5 a.m. until further notice.

Mayor Jerry Demings announced that he is enacting a curfew in unincorporated Orange County in response to the protests that took place on Saturday.

A statement from Mayor Demings on recent events:

"As the first African-American elected Mayor of Orange County, I want to acknowledge we have a systemic problem with racism in America. It is my solemn commitment to work with community leaders in addressing it."

"I support and applaud peaceful and thoughtful protests.  However, we cannot as a civilized society accept violence and destruction of property as a solution. The call to action for protests must be done in a nonviolent manner with a healthy respect for the rule of law."

"I stand with law enforcement leaders who have called for change and are against the unjustified use of force. We must be unified and have a respect for one another, especially during this time of a pandemic."

"As a former police chief and sheriff, lawlessness is not the answer. I will be working with local leaders, clergy and law enforcement to develop long and short-term strategies to address the myriad of issues facing our society."

On Saturday, protesters marched up and down the streets of Downtown Orlando on Saturday, demanding justice for George Floyd. When protesters started to set off fireworks, police responded with pepper spray.

Orlando Mayor Buddy Dyer began the news conference on Sunday by expressing that "what happened to George Floyd was horrific, unacceptable, and not the first time" that black Americans have been killed, referencing Breonna Taylor and Ahmad Arbery, two other recent deaths. 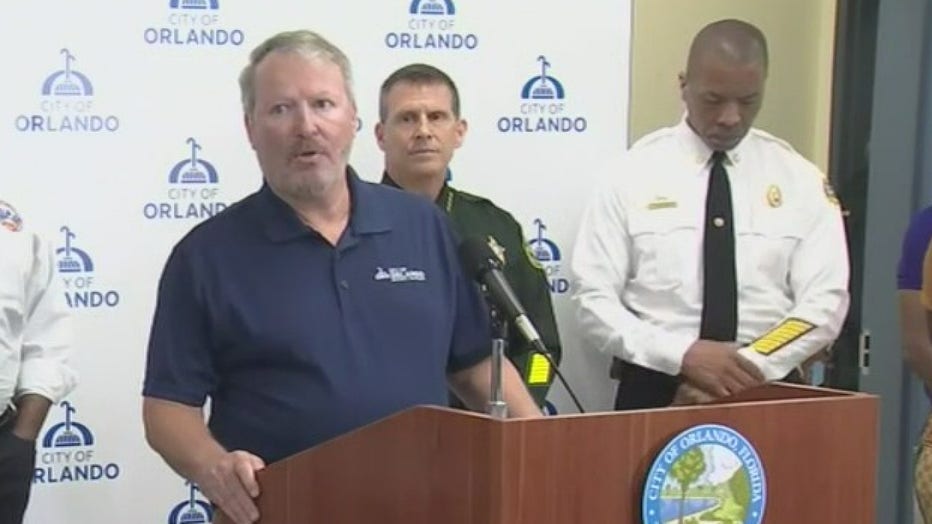 "What I can say is that I see you, I hear you, and above all else, we will not remain silent. Together, we will enact change by joining our voices," he added. "Demonstrations allow us to join together peacefully."

He acknowledged that for hours, residents were peaceful in their demonstration through Downtown Orlando but that a small group of people brought violence.

"We support your demonstrations, we stand with you," Dyer said. "But we do not welcome violence of any type."

He reiterated before giving the Orange County Mayor Demings the chance to speak that "we will show that Orlando is united in love, united in compassion, and united in understanding.

Mayor Demings began his thoughts by stating that there are systematic problems with racism in America and that he has tried to change that from within during his career. 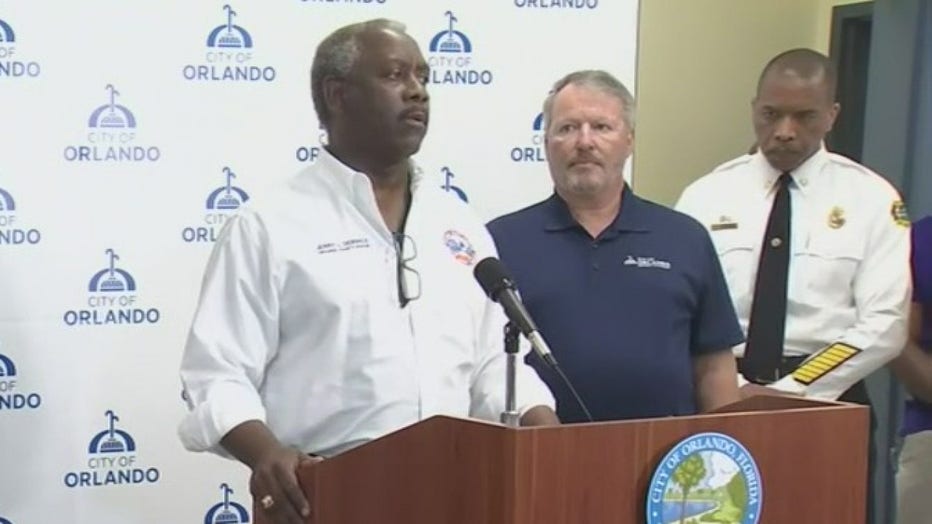 However, he said that this must be done with peace, citing that "that response has to be one that is thoughtful and peaceful, with the help and respect of the rule of law” and that "we cannot accept violence and destruction of the property of others."

He assured that "we will continue to work to address those systemic issues that we have seen” but encourages people to do it through advocacy, volunteering, running for office, and being the kind of leaders you want to see.

He went on to enact the nightly curfew.

Orlando Police Chief Rolon spoke next and said that he was "proud of the professionalism displayed by the members of OPD and that we will continue to be here, serving and protecting the city of Orlando." 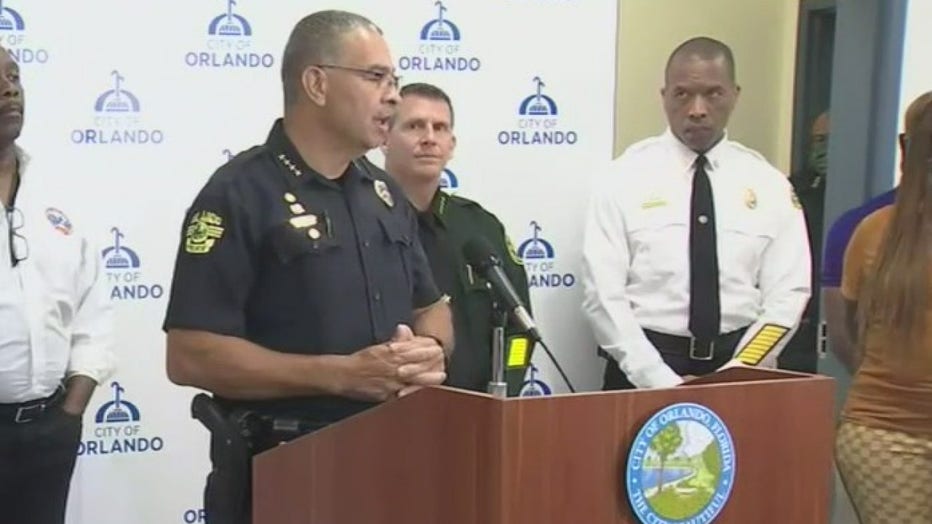 He went on to detail Saturday's events, stating that the protests were peaceful for hours. However, at one point, an individual was taken into custody for battering an officer. When some demonstrators saw the arrest taking place, they attempted to intervene by pulling the individual away while others threw fireworks at the officers. Pepper spray was used by officers to deescalate the altercation. Two men were arrested.

Then, on the 408, officers warned demonstrators to leave but after five and a half hours of peaceful demonstration, people in the crowd began to throw rocks and bottles at the officers. Officers then deployed smoke. This was not initially tear gas, Chief Rolon said.

A small group of protesters went on to gather at the Orlando Police Department, where some threw bottles and fireworks towards the officers in the building, he added. When officers put on their masks, signaling they may release a chemical agent, the protesters stopped.

Rolon then confirmed that looting was happening at businesses near the Mall at Millenia. 30 cars were said to be at the mall itself but when they heard about the incoming police presence, they turned their attention to standalone businesses nearby. At least eight people were arrested in connection to these incidents.

Orange County Sheriff John Mina spoke next, denouncing the criminal actions of the former police officer in Minneapolis that is charged with the death of George Floyd. 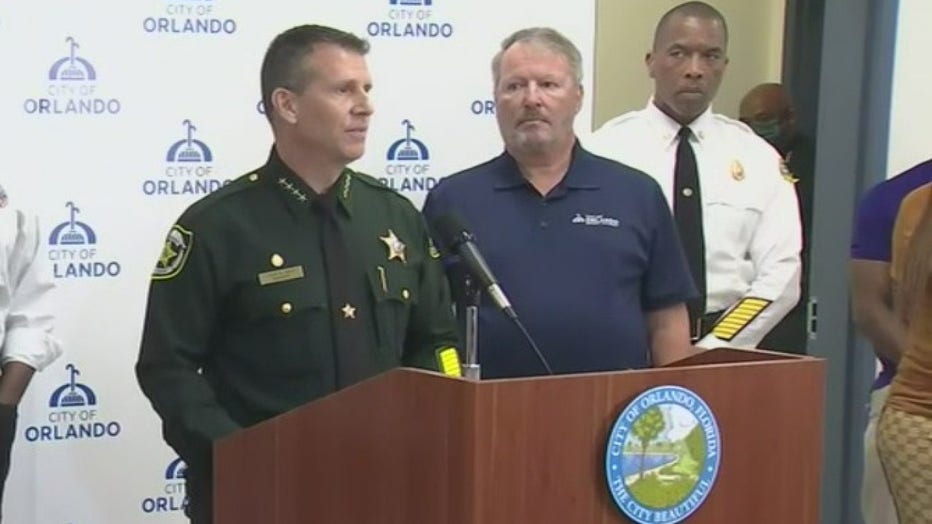 He spoke about the officer's home in Orange County and how deputies have allowed peaceful protests there for several days now. However, he added that we cannot have violence or property damage though.

"We'll gather. We can express our feelings. We can express our anger. But certainly, this cannot rise to the point where it becomes violent or where businesses or property damage happens," he said. On Saturday night, he confirmed that "about half a dozen businesses in Orange County were broken into and damaged. We did make two arrests in one of the cases. A beauty shop on West Colonial. There was actually a water bottle filled with gasoline found in that store and thankfully, it did not ignite."

He also said that two of his deputies were struck with concrete on that same night and are going to be okay.