Truck drives through crowd of protesters in Tallahassee, police say

TALLAHASSEE, Fla. - A pickup truck drove through a crowd of protesters Saturday in Florida’s capital, sending some running and screaming as protests across the state erupted in violence, especially in Miami where police cruisers were burned and authorities threw tear gas.

Video shows Tallahassee protesters walking around the truck as it stopped at a traffic light, while some appeared to speak to the driver. In one video, a bottle was apparently smashed against the widow and the truck then suddenly accelerated, knocking several people to the side, but no serious injuries were reported.

Saturday’s protest demanding justice for George Floyd was one of several in Florida and dozens across the nation. Demonstrators outraged over Floyd’s death faced off against heavily-armed officers in other states Friday, with some smashing police cars, ransacking businesses and setting fires that smoldered through the night.

An officer, who is seen on video pressing his knee on Floyd’s neck for several minutes as Floyd begged for air, was charged Friday in Floyd’s death.

Lucas von Hollen, an IT instructor at Florida State University, heard a distinct scream of fear from the crowd of protesters and saw the burgundy pickup from the second-floor window where he was working.

“The truck revved its engines … a couple people got out of the way, but some people didn’t, and it just drove straight through the crowd,” he said. 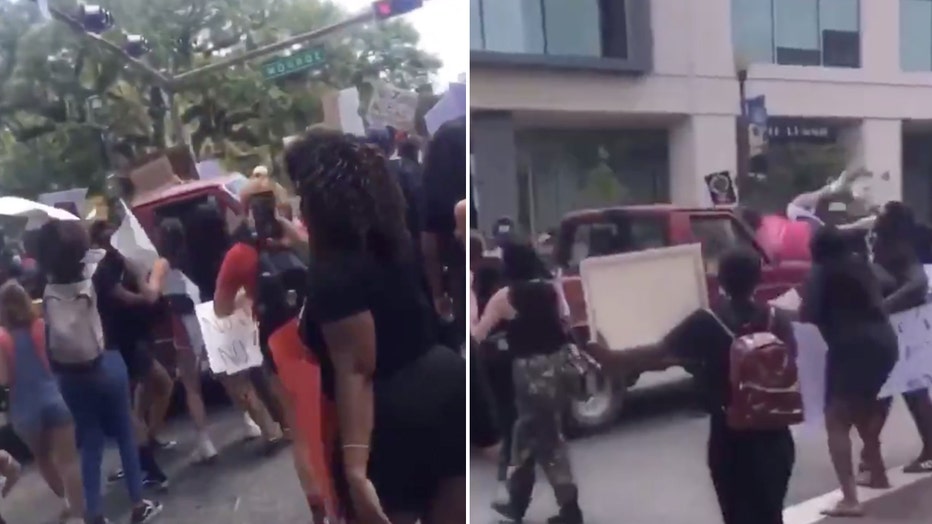 Witnesses said a group followed the truck, forcing it to stop. Tallahassee Police immediately handcuffed the driver, shut down the street and redirected protesters to another area.

Police did not release the name of the driver or say whether he would face any charges.

“This is an extremely tense, emotional time across the nation,” Chief Lawrence Revell said in a statement. “Mutual respect among all of us is vital.”

Meanwhile, in Orlando, several stores in the Mall of Millenia area were broken into and damaged by looters as 'Justice for George' protests across the city erupted on Saturday night.

Protesters in Downtown Orlando set off fireworks and threw bottles and police responded with pepper spray. Police went on to close Orange Avenue as people marched up and down the streets, demanding justice for George Floyd.

Then, on the 408, protesters gathered and were climbing barriers and blocking the highway. Many participants carried signs and denounced police brutality. Police said that some protesters threw rocks at bottles at officers, forcing them to use a "chemical agent" to clear them from the highway. At least six people were arrested.

Further south in Miami, what started as a peaceful protest turned violent as a small group set fire to multiple police cruisers, prompting police to respond with tear gas and fireworks to disperse the crowd, witnesses said. The mayor set a 10 p.m. curfew.

At one point, Interstate 95 was shut down in both directions as a group of protesters stood on the busy roadway. Miami-Dade Mayor Carlos Gimenez warned on Twitter that the highway protest was “creating a dangerous situation for themselves and others. This is not the place or way to protest.”

Police officers later used bicycles to push back an increasingly rowdy crowd throwing rocks. Cars were also vandalized, including those belonging to protesters.

Miami-Dade police tweeted that 38 people had been arrested in connection with Saturday’s protests.

“It started off peaceful and we were just walking around chanting stuff, trying to have all our voices heard and when we got to the police department that’s when things started to get a little rowdy,” said Savano Wilkerson, a 22-year-old West Palm Beach resident.

He was overcome by the tear gas, along with others around him.

“I had to get milk poured in my eyes twice because I was hit with the gas twice,” he said.

Police issued a dispersal order, warning protesters they would be arrested for trespassing if they did not leave the area.

Liseth Hatta, a 27-year-old student at Florida International University, said the protest was largely peaceful with many in the crowd of about 500 singing and urging each other not to break windows or hurt businesses.

But when they arrived at the police station, another group of protesters also converged there and things escalated within minutes.

“There was a sniper on the roof with the police chief standing next to him and they started throwing smoke bombs to the crowd. Most of them were kids. They couldn’t have been older than 21. Everyone ran away screaming,” she said.

Miami Police Chief Jorge Colina confirmed some were arrested, but said “it’s not a big number.”

“The restraint the officers have shown, I’m incredibly proud of their efforts,” he said, condemning Floyd’s death, adding he should still be alive.

Then in Tampa, protesters smashed store windows and set a gas station ablaze on Saturday night. Some broke into an AT&T store and a jewelry shop after the protests earlier in the day had been peaceful. 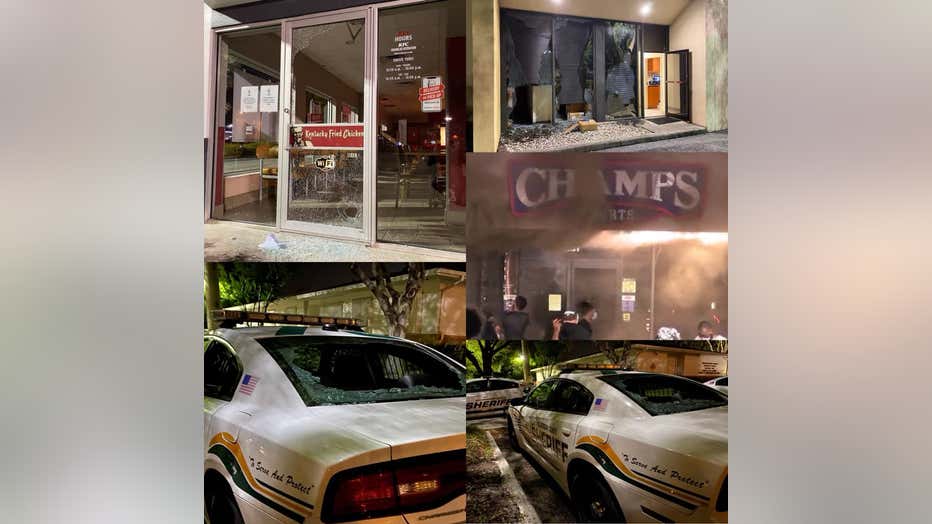 Deputies in riot gear lined up outside the doors to the University Mall as hundreds of people protested in the mall’s parking lot, with some on top of their cars. Video from the Tampa Bay Times shows a small group of protesters jumping on and lobbing projectiles at a moving armored vehicle. The Hillsborough County Sheriff’s Office tweeted that a deputy at the mall was hit in the back of the head with a “hard object.”

Tune in to FOX 35 for the latest Central Florida news.