SAN JOSE, Calif. - Two people died and three others were injured in a stabbing at a downtown San Jose church and on Monday morning, police said that they had arrested at least one suspect, police said.

There was no immediate word on who that was, or if police were searching for more suspects.

The arrest follows  "multiple stabbing victims; some with life-threatening injuries" at Grace Baptist Church on Sunday about 8:45 p.m., the San Jose Police Department tweeted. When police arrived, Officer Steve Aponte said they found five people suffering from at least one stab wound each. A man was declared dead at the scene; a woman died later at the hospital.

Three other men were transported to local hospitals, Aponte said. They are in serious but stable condition.

The violence did not occur during a religious ceremony, the police said. Instead, the attack apparently involved people who were receiving shelter in the church.

"Unhoused individuals were brought into the church to get them out of the cold," the police department said.

A source said KTVU there were victims inside and outside the church, which serves overnight as a shelter.

Mayor Sam Liccardo tweeted that the city's "hearts are torn" over the fact that San Jose lost "two community members."

Investigators have not said what led to the stabbing.

Anyone with information is asked to Contact Detective Sergeant Lewis #3161 or Detective Meeker #3272 of the San Jose Police Department’s Homicide unit at 408-277-5283. Anyone wishing to remain anonymous may call the Crime Stoppers hotline at 408-947-7867. 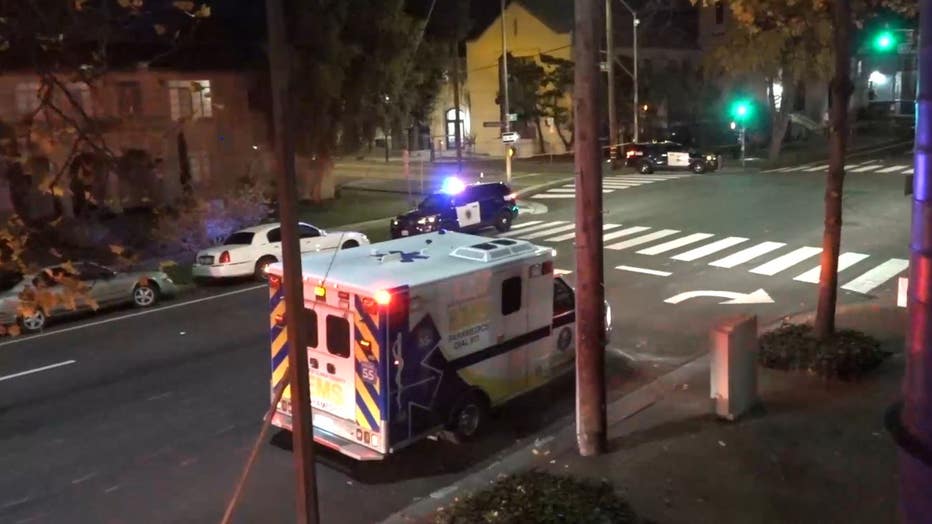 Police cars and an ambulance are seen outside Grace Baptist Church in San Jose where two people were fatally stabbed on Nov. 20, 2020