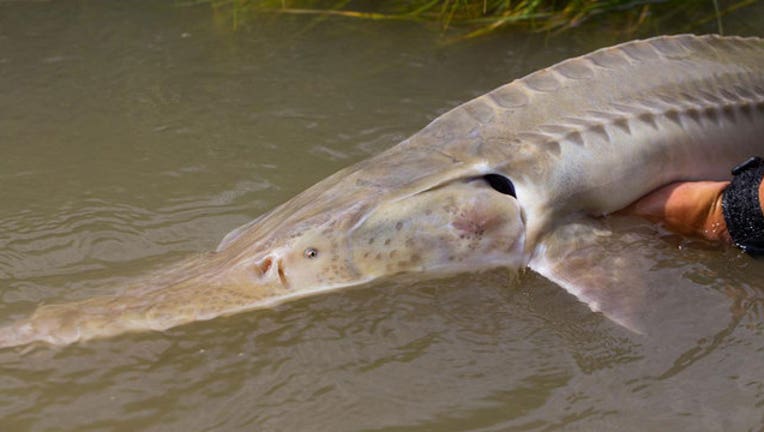 BILLINGS, Mont. (AP) - A group of Montana and federal wildlife officials has expressed opposition to a $57 million concrete dam and fish bypass that the U.S. government says would help an ancient and endangered fish species in the Yellowstone River.

The U.S Army Corps of Engineers and Interior Department are proposing the irrigation dam and bypass on the lower Yellowstone near the Montana-North Dakota border. That's where aging pallid sturgeon have been trapped for decades downstream of their spawning grounds.

But wildlife officials from a government-sponsored pallid sturgeon recovery group dismissed the project's alleged benefits for the fish as "unfounded" and "purely theoretical."

The group, known as the Upper Basin Pallid Sturgeon Workgroup, includes representatives of state and federal wildlife agencies, the U.S. Army Corps of Engineers and Interior's Bureau of Reclamation.

The group's concerns were detailed in a July 28 letter to the Army Corps that was obtained by The Associated Press. It puts the Interior and Army Corps in the awkward position of promoting a costly construction project opposed by a group that includes members of their own staff and those from other agencies.

Project manager Tiffany Vanosdall said the Army Corps continues to believe the dam and fish bypass would help sturgeon. An environmental study of the project is due to be completed late this year, Vanosdall said.

"We are working on other analyses of why we believe the bypass channel would work," she said.

Pallid sturgeon — with their shark-like shape and long snout — have changed little over the past 200 million years, earning the species recognition among scientists as a "living fossil."

The bypass would be located northeast of Glendive, Montana.

It's meant to give sturgeon access to upriver spawning grounds while maintaining an irrigation system that serves more than 50,000 acres of farmland in Montana and North Dakota. The recovery group's letter said it would be better to remove an existing rock weir on the river that traps the decades-old fish downstream.

"We believe the most beneficial alternative for pallid sturgeon would involve removing the existing barrier to provide full-river passage," the group wrote. "Across North America, sturgeon species have exhibited little success with fish passage structures."

The July 28 letter was signed by the sturgeon recovery group's chairman, Zachary Shattuck, a native fish specialist with Montana Fish, Wildlife and Parks.

Shattuck has since asked to rescind the letter, over concerns that it was not reviewed by senior officials at the U.S. Fish and Wildlife Service, which has oversight for the recovery group.

"The decision to rescind the letter doesn't reflect on the nature of the comments," said Greg Lemon, a spokesman for Montana Fish, Wildlife and Parks. "It just reflects a mistake in the process."

Shattuck said Wednesday that the comments were made on behalf of the sturgeon recovery group, not just himself. But he said he did not want to send "mixed signals" about the project and referred further questions to U.S. Fish and Wildlife Service Assistant Regional Director Mike Thabault.

Thabault said the federal agency supports the fish bypass as the best alternative for the fish while also maintaining irrigation. He acknowledged "there's room for debate" and not everyone in the scientific community agrees.

Thabault confirmed that his agency had concerns about the contents of the recovery group's letter, adding that the objections to the dam and bypass should have been taken to the agency's regional director instead of submitted to the Army Corps. But Fish and Wildlife Service personnel did not ask Shattuck for a retraction, Thabault said.

A representative of Defenders of Wildlife, Jonathan Proctor, said the recovery group's comments come at a crucial time for sturgeon, which face potential extinction in the Upper Missouri River Basin unless they can get upriver to spawn.

"Their own biologists have stated clearly that this will not work and the best solution is to restore a free-flowing Yellowstone River," Proctor said. Defenders of Wildlife and the Natural Resources Defense Council sued to stop the project last year.

As a result, U.S. District Judge Brian Morris blocked construction of the dam just as it was set to begin last September. The government's plan includes a 2-mile concrete channel for sturgeon to get around the dam, but Morris said the agencies never proved it would work.