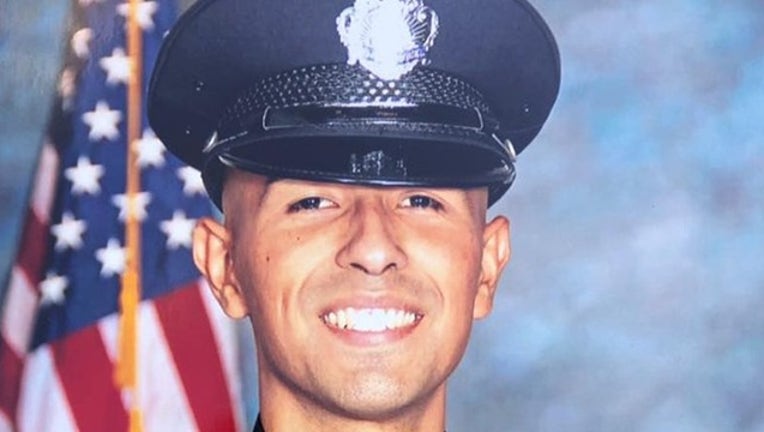 LOS ANGELES (AP) - An off-duty Los Angeles police officer was shot and killed at a Lincoln Heights taco stand early Saturday and authorities are searching for a suspect.

Officer Juan Diaz was out with his girlfriend and two other males when he was shot, according to an official who had been briefed on the investigation but was not authorized to speak publicly.

Diaz was standing in line at the food truck with his girlfriend and two other males when he noticed a man vandalizing something nearby and approached him, the official said. The official did not know if Diaz identified himself as a police officer.

The man left and a short time later returned with a group of other males and lifted up his shirt to display a handgun, the official said. The official added that Diaz and the others tried to get into a car to avoid violence but the man started shooting.

Assistant Chief Beatrice Girmala said a civilian flagged down a motorcycle officer at around 1 a.m. Saturday and reported shots fired. The officer found two men had been shot.

Diaz died from his wounds and the other man was hospitalized in unknown condition.

Police believe the gunman is a member of the Avenues gang, which is now the focus of the department's investigation, according to the official who was not authorized to speak publicly.

"Words cannot match the depth of sorrow that Angelenos are feeling today," Mayor Eric Garcetti said in a statement, calling it a senseless murder.

The LA Police Protective League released a statement calling for the police chief to utilize every department resource to find the gunman.

"We mourn the loss of our brother and we will always remember his service and sacrifice to the Los Angeles Police Department and the residents of our city," it said.