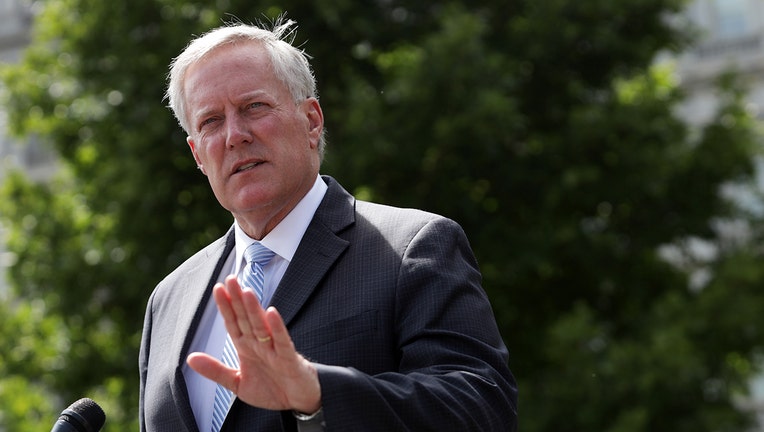 Then-White House Chief of Staff Mark Meadows speaks to members of the press outside the West Wing of the White House on August 28, 2020 in Washington, DC. (Photo by Alex Wong/Getty Images)

RALEIGH, N.C. - North Carolina state investigators are probing the voter registration of Mark Meadows, a former chief of staff to President Donald Trump, amid questions about him listing a home he never owned on voter records, the state attorney general’s office said Thursday.

Attorney General Josh Stein's office asked the State Bureau of Investigation to look into Meadows' voter registration after a local prosecutor requested that state authorities oversee any probe of the matter, N.C. Department of Justice spokeswoman Nazneen Ahmed said in an email.

"We have asked the SBI to investigate and at the conclusion of the investigation, we’ll review their findings," Ahmed said.

In a letter Monday, Macon County District Attorney Ashley Welch asked the attorney general's office to handle any probe into Meadows' voter registration and said that she would recuse herself from the matter. She noted that Meadows, a former congressman from the area, contributed to her campaign for DA and appeared in political ads endorsing her.

She also said she had no knowledge of the case until it was reported in the media.

"Until being contacted by the media, I was unaware of any allegations of voter fraud surrounding Mark Meadows," she said

Public records show that Meadows is registered to vote in two states, including North Carolina, where he listed a mobile home he did not own as his legal residence weeks before casting a ballot in the 2020 presidential election.

Meadows listed a mobile home in Scaly Mountain, North Carolina, as his physical address on Sept. 19, 2020, while he was serving as Trump’s chief of staff in Washington, D.C. Scaly Mountain is just north of the Georgia-North Carolina border and about 90 miles (145 km) west of Asheville.

Meadows later cast an absentee ballot for the general election by mail. Trump won the battleground state by just over 1 percentage point.

The New Yorker, which first reported the questions about Meadows' voter registration, interviewed the current and former owner of the Scaly Mountain property. The previous owner said Meadows’ wife rented the property "for two months at some point within the past few years" but only spent one or two nights there. Neighbors said Meadows was never present, The New Yorker reported.

Meadows frequently raised the prospect of voter fraud before the 2020 presidential election, as polls showed Trump trailing Joe Biden, and in the months following Trump’s loss to suggest Biden was not the legitimate winner. He repeated those baseless claims that the election was stolen in his 2021 memoir.