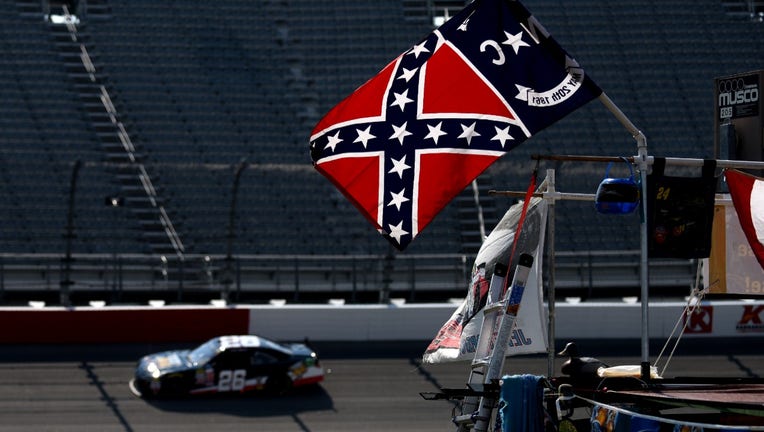 A view of the Confederate flag seen flying over the infield during practice for the NASCAR XFINITY Series VFW Sport Clips Help A Hero 200 at Darlington Raceway in Darlington, South Carolina. (Photo by Jonathan Moore/Getty Images)

LAKE MARY, Fla. - NASCAR on Wednesday announced it will ban the display of the Confederate flag at all of its events and properties.

"The presence of the confederate flag at NASCAR events runs contrary to our commitment to providing a welcoming and inclusive environment for all fans, our competitors and our industry," the privately-owned company tweeted. "Bringing people together around a love for racing ad the community it creates is what makes our fans and sport special."

The announcement was made as the nation is embroiled in protests over the death of George Floyd and calls for racial equality.  It also comes a day after Darrell "Bubba" Wallace Jr. said he will be showcasing a #BlackLivesMatter paint scheme during the Blue-Emu Maximum Pain Relief 500 NASCAR Cup Series race on June 10.

Floyd’s death drew new attention to the treatment of African Americans in the U.S. by police and the criminal justice system.

In the past two weeks, sweeping and previously unthinkable things have taken place: Confederate statues have been toppled, and many cities are debating overhauling, dismantling, or cutting funding for police departments. Authorities in some places have barred police from using chokeholds or are otherwise rethinking policies on the use of force.

NASCAR has returned to racing but had not allowed fans inside the tracks in North Carolina, South Carolina, and Georgia. On June 9, NASCAR announced that it would be allowing a limited number of fans at upcoming races in Florida and Alabama.