Several big brands and names have pledged money in support of the black community.

“It was actually on Blackout Tuesday, which was a special day and a big day for our country, seeing millions and millions of people peacefully protesting,” the driver said. “We knew that Martinsville race was open. We did not sell a sponsorship for that and it sparked an idea of why not run a blackout car?”

The team at Richard Petty Motorsports and Wallace collaborated to come up with the paint scheme.

“Our team brought that idea to me and I jumped all over it,” Wallace said. “And we had further conversations about, why not, let’s make a statement behind it, run a foundation or a charity that is helping push the narrative and the initiative of what’s going on in the world today.”

”Why not dive straight into the root and putting Black Lives Matter on the car, the most powerful hashtag going around?“ Wallace continued.

In the video, one of the designers at Richard Petty Motorsports spoke about the decal, noting how the clasped hands on the hood of the car were hand-drawn. The designer also noted that #BlackLivesMatter will be featured on both sides of the car. 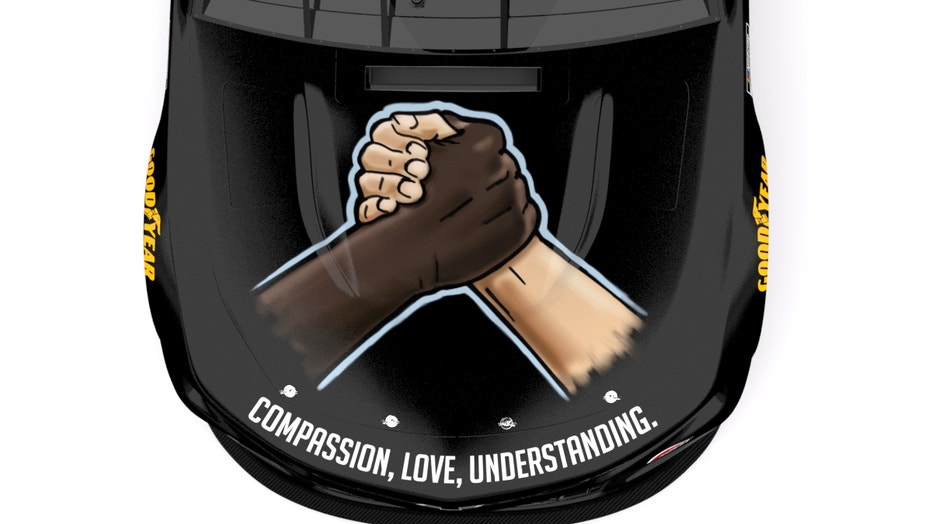 Hand drawn hands clasped together on the hood of Wallace’s car will be showcased at the Blu Emu 500 in Martinsville Speedway.

“And it’s true, black lives do matter. It’s not that we’re saying no other lives matter, what we’re trying to say is black lives matter too,” Wallace said. “We want to be treated equally and not judged off our skin color and the actions.”

“That’s what we’re trying to get across. We want to be a part of this nation as one and come together as one,” Wallace noted.

The driver’s decision to drive a Black Lives Matter-decorated car in his next race comes after the death of George Floyd. 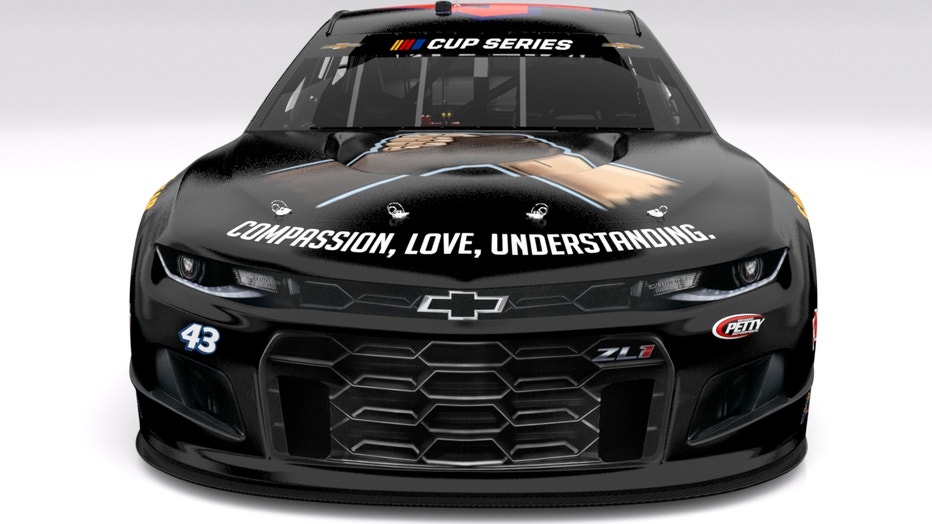 The front of Wallace’s #BlackLivesMatter paint schemed car with “Compassion, Love, Understanding.” on the hood.

Floyd’s death drew new attention to the treatment of African Americans in the U.S. by police and the criminal justice system.

In the past two weeks, sweeping and previously unthinkable things have taken place: Confederate statues have been toppled, and many cities are debating overhauling, dismantling or cutting funding for police departments. Authorities in some places have barred police from using chokeholds or are otherwise rethinking policies on the use of force.

Floyd, a bouncer who had lost his job because of the coronavirus outbreak, was seized by police after being accused of passing a counterfeit $20 bill at a convenience store. He was pinned to the pavement for what prosecutors say was 8 minutes, 46 seconds — a number that has since become a rallying cry among protesters.

“All lives will not matter until black lives matter, so I think by running this branding on our car, putting the hashtag out there, bringing more awareness to it, it lines up with the videos that we have put out as NASCAR,” Wallace said. “Listening and learning and educating ourselves so people will look up what this hashtag means and hopefully get a better understanding and know that we are not trying to create division, you’re trying to unite,” Wallace said.

In light of recent events, NASCAR President Steve Phelps delivered a message during warm ups at the Atlanta Motor Speedway on June 7.

RELATED: NASCAR President says 'our sport' and 'country' need to do better on racial injustice

“Our country is in pain and people are justifiably angry, demanding to be heard,” Phelps said. “The black community and all people of color have suffered in our country, and it has taken far too long for us to hear their demands for change. Our sport must do better. Our country must do better.”

NASCAR has returned to racing, but had not allowed fans inside the tracks in North Carolina, South Carolina and Georgia. On June 9, NASCAR announced that it would be allowing a limited number of fans at upcoming races in Florida and Alabama.

The Associated Press contributed to this report. This station is owned by the FOX Corporation.