After experiencing the wrath of Hurricane Nicole last week, which caused some minor damages to the SLS rocket, NASA engineers have been working to make some repairs ahead of the Wednesday launch at 1:04 a.m. Eastern.

KENNEDY SPACE CENTER, Fla. - It's launch week in Florida for NASA's mega moon rocket, the Space Launch System and Orion spacecraft, as the space agency tries for the third time to complete the Artemis 1 test flight.

After experiencing the wrath of Hurricane Nicole last week, which caused some minor damages to the SLS rocket, NASA engineers have been working to make some repairs ahead of the Wednesday launch at 1:04 a.m. Eastern.

NASA managers told reporters Sunday after a launch readiness review there are still two outstanding issues being addressed from Nicole when the hurricane rolled through Florida's Space Coast with the Artemis 1 rocket standing on Kennedy Space Center's launchpad 39B.

NASA Associate Administrator for Exploration Systems Development Jim Free said regardless of Nicole and the number of launch attempts, "the stakes are the same" for NASA.

"This core stage is no stranger to named storms. They started when it was at Michoud, when it was at Stennis, and now it's continued here at Kennedy," Free said of the NASA facilities the bright orange core stage has visited during assembly and testing.

Free continued, "We're going to go when we're ready. We're learning the systems of this vehicle."

RELATED: Artemis I mission: Jetty Park will be closed during NASA's space flight to the moon

NASA Artemis mission manager Mike Sarafin explained the two issues discovered after Nicole come with small risks but should not prevent the launch. After the launch readiness review on Sunday, no members of the launch team dissented against the launch attempt, Sarafin said.

The first issue was detected from an electrical connector on the tail service mast umbilical, which carries information from the rocket to confirm launch criteria through the countdown. The connector was giving off inaccurate data, and teams continued to work Monday to repair the issue. NASA says they have redundant sensors on SLS should the connector continue to give off errors.

A second issue NASA will continue to review Monday is regarding the room-temperature vulcanizing material or RTV – an engineer’s way of saying silicone caulking – that has come off from the base of the Orion spacecraft. Managers believe the material that encircles the spacecraft was knocked loose from Hurricane Nicole’s winds and heavy rain.

Sarafin said the area affected is about 10 feet in length around the rocket and is a very thin layer, about 0.2 inches or less in thickness.

The RTV cannot be repaired before the launch because it's impossible to access it while the 322-foot-tall rocket is on the launchpad. Orion sits at the very top of the rocket.

"It is way up the stack, and we don't have access around the entire circumference (of Orion) out at the pad," Sarafin said.

When NASA launches its Artemis I moon rocket with the Orion spacecraft, humans will not be aboard, but scientists will be focused on three manikins who will be collecting important data during the multi-week excursion.

While NASA managers say the loose caulking is not a risk for launch, there is some concern about what happens after SLS launches with more than 8 million pounds of thrust if more RTV falls off.

On Monday, the launch team will gather again to discuss further any risk associated with the RTV.

Launch Director Charlie Blackwell Thompson explained that through the previous launch attempts and a fueling test in September, the team has worked to perfect the countdown procedures.

From lessons learned, the team will take a "kinder, gentler" approach to fuel the rocket with liquid hydrogen and liquid oxygen. This method will increase pressure gently to avoid any possible hydrogen leaks that caused problems for both previous launch attempts.

"When you reduce the pressure and the flow rate, it takes a little bit longer to get that big tank full," she said. "And we incorporated that into our loading timelines. We demonstrated that during our prior demonstration or taking test and that all went very well."

If any issues pop up, NASA has 2 hours in the launch window opening at 1:04 a.m. Wednesday to troubleshoot.

U.S. Space Launch Delta 45 Weather Officer Melody Lovin said of all the Artemis 1 launch attempts, this one has the best forecast so far.

A cold front moved through Sunday, dropping the temperature and humidity on Florida's Space Coast and giving teams working on the rocket ideal weather to be outside on the launchpad this week. 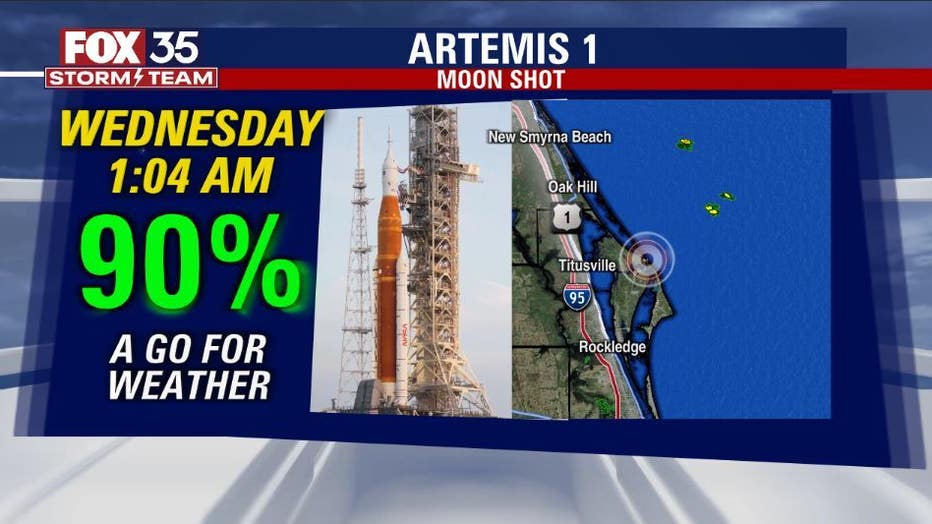 A frontal boundary will keep any rain mostly offshore and the chance of showers low through the two-hour launch window Wednesday.

Overnight Wednesday, temperatures will be near 70 degrees. Winds from the south-southwest will be around 10 to 15 knots (12 to 17 mph) up to 200 feet. Overall, it will be a nice night for a rocket launch or for watching the historic maiden flight in person.

What is the Artemis 1 mission?

Artemis 1 is an uncrewed test flight of NASA's SLS and Orion designed to test the rocket and spacecraft's abilities in orbit and around the moon.

The mission is to complete a lunar orbit, traveling a distance of about 280,000 miles from Earth around the moon.

If the launch happens on Wednesday, Orion will splash down off the Pacific Coast on Dec. 11.

If the test flight is successful, NASA astronauts will launch on Artemis 2 around the moon and back. Ultimately, NASA's goal is to land humans back on the moon by 2025 during the Artemis 3 mission.