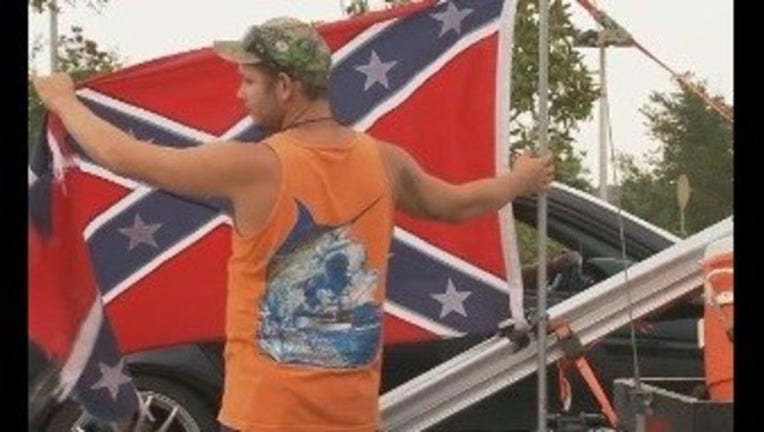 More than 200 people packed Melbourne’s City Council chambers.  Many gathered two hours before hand and drove trucks and cars with Confederate flags along a few of the main drags in town, one behind another, before going over to city hall.

Council woman Theresa Lopez participated in the city’s 4th of July parade for the first time this year.  While doing so, she noticed the Sons of the Confederacy marching with American and Confederate flags.  Bothered by it, she got off the float she was to be riding on, deciding not to participate in the parade.

Tuesday night Lopez asked fellow council members to take a stand against the display of the Confederate flag by asking them to do two things if a confederate flag is on display at a city sponsored event.    One, end the city waiver of police and traffic fees, which amount to roughly $1500.  Two, she ask that the city forbid both city officials and city equipment, like fire trucks, to be on display in parades where a confederate flag is being flown.

Lopez’s proposal was shot down immediately.  Not one council member seconded it.  “The fact she wants to restrict me from being in a parade with any kind of flag is ridiculous,” councilman Mike Nowlin said on the record.

Council members said “nay” before public input.  Since so many people packed chambers to voice their opinions on the matter, city leaders allowed each person the opportunity to be heard.  Dozens got up and spoke.  “Ladies and gentlemen, this flag represents heritage, not hate,” said Dale Davis of

Melbourne as he and child held up a confederate flag.  “We should not make this a blood feast but recognize while the confederate battle flag brings pride to some of the citizens in city. It is a symbol of oppression and a reminder of the inhumane treatment of the millions of people of African descent,” said  Roberta Clinkscales, a leader with the local chapter of the NAACP.

While there were two very opposing sides voicing their opinions, it was all done peacefully.