Processing appears to speed up at Orlando ICE office

Dozens of people waited in line Wednesday morning outside the U.S. Immigration and Customs Enforcement office in Orlando to meet with officials about their cases. However, by the afternoon, nearly everyone in line had presumably met with officials.

ORLANDO, Fla. - Dozens of people waited in line Wednesday morning outside the U.S. Immigration and Customs Enforcement office in Orlando to meet with officials about their cases. However, by the afternoon, nearly everyone in line had presumably met with officials.

It's a noticeable difference from the near-constant line that particular office has seen for the last week. Hundreds of people have literally camped outside the office waiting for their turn to talk with an agent. Some people set up tents, others took naps on the side of the road, and church groups showed up with toys and water.

FOX 35 noted officials guiding people through the process. By 1 p.m. the line was empty.

"Yesterday morning when I came here, I saw a lot of people in here with the tents and the chairs," said Rene Auguste. "This was crazy."

August has visited the office at least three times trying to get appointments and help her family members through the immigration process. "They made it through today," she said, noting family members said it took less than an hour. 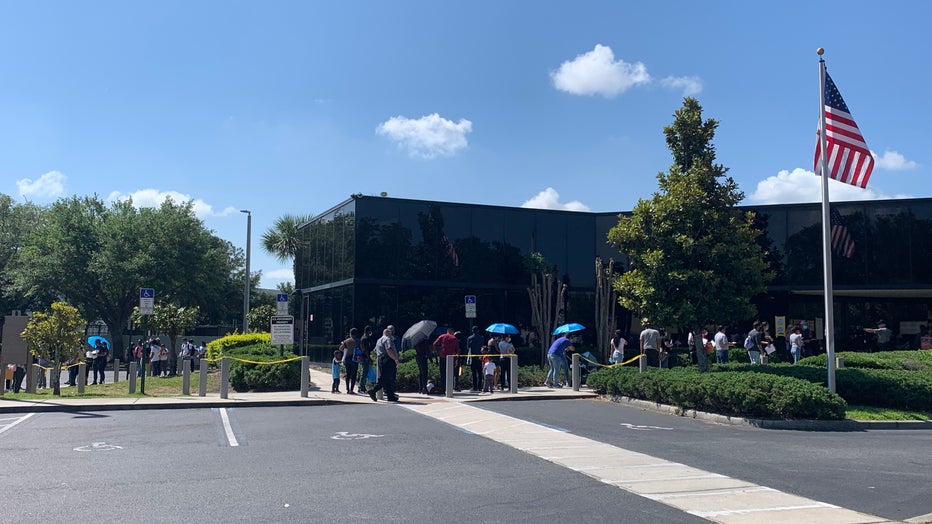 The line outside the ICE office in Orlando appeared to be moving faster on Wednesday.

The Department of Homeland Security announced recently that it would extend the deadline that people have to apply for work applications. The agency said it would help with a backlog of cases that were made worse by the COVID-19 pandemic, though it's unclear what impact that would have on the Orlando office, which mainly handled immigration cases for those who've recently crossed the border.

FOX 35 has been reporting extensively on the long lines and delays at the ICE office in Orlando for the last week.

Florida Rep. Val Deming's office told FOX 35 that staff has been in contact with ICE about staffing, but could not confirm what specific changes were made. A spokesperson for ICE did not respond to FOX 35's request for comment on Wednesday.

However, earlier in the week, a spokesperson said the agency was working to address the delays.