On Wednesday afternoon, hundreds of men, women, and young children were seen waiting in line or seated on the side of the road near the U.S. Immigration and Customs Enforcement office in Orlando

ORLANDO, Fla. - Dozens of immigrants – hundreds by some counts – have been standing in line and camping outside a U.S. Immigration and Customs Enforcement office in Orlando waiting to speak with an agent.

Wednesday afternoon, men, women, and young children were seen waiting in line or seated on the side of the road near the ICE office. Later that evening, some people were seen putting up tents, seemingly prepared to stay the night.

"It’s been pure hell because they have to sleep on the sidewalk," said Galo Delgado, whose nephew has been waiting for weeks to talk with an ICE agent. "They have to do things that they’ve never done. There are no facilities here to go to the bathrooms."

Amid the mass confusion, some have started their own system to keep track of the line.

Jesus Hernandez told FOX 35 that he was booked for an appointment for April 12 – more than two weeks ago. He stayed the night before because he was worried he would miss his appointment, and doesn't want to be late for any future ones. 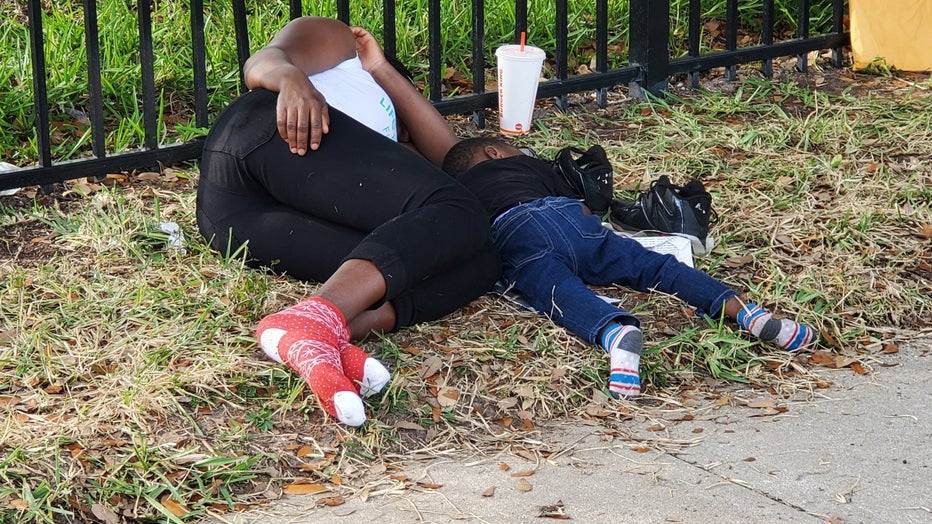 A woman and young child sleep next to the street outside an ICE office in Orlando. Photo via FOX 35.

He fears being deported if he does not check in.

"They can send a team of ICE agents out to find you, wherever you might be, detain you and either deport you if they have an order of removal already or put you in detained immigration court where you have to do the rest of your case from jail," said John Gihon, an immigration attorney.

He said the Orlando ICE office was closed for nearly two years because of the pandemic and now faces a massive immigration backlog.

"For the numbers of people who are showing up there, absolutely understaffed," he said.

A spokesperson for ICE told FOX 35 that they were aware and looking into the situation at the ICE center in Orlando, but did not elaborate or provide additional information.