Disney Wish gets ready to set sail from Florida

Disney Wish is the newest ship to join Disney Cruise Line and will set sail from Port Canaveral on its first voyage to Castaway Cay, Disney's private island in the Bahamas, on July 14. FOX 35's David Martin is going aboard the ship for a christening ceremony on Wednesday and is giving us an inside look.

PORT CANAVERAL, Fla. - Disney Wish is the newest ship to join Disney Cruise Line and will set sail from Port Canaveral on its first voyage to Castaway Cay, Disney's private island in the Bahamas, on July 14. On Wednesday, June 29, the cruise ship will be officially christened ahead of its maiden voyage. If you have a trip booked or are planning one, here’s everything you need to know about the attractions, restaurants, and shows that Disney Wish has to offer. Watch the christening live in the YouTube player below:

How big is Disney Wish?

The 1,119-foot ship, originally built in Papenburg, Germany, weighs close to 144,000 gross tons.  It is also 221 feet tall and will set sail at a cruising speed of 19.5 knots.  Disney Wish has 15 decks of fun, adventure, and leisure.  There are about ten pools and water play areas inspired by Mickey Mouse and his friends.

Disney Wish can hold about 4,000 passengers and has a crew that is about 1,555.  The ship consists of 1,254 staterooms, with 90 percent of the rooms classified as outside staterooms, some of which include an ocean view.

What attractions are aboard the ship?

AquaMouse is Disney's first-ever attraction at sea according to Disney Wish.  The attraction is a water adventure inspired by the Mickey Mouse animated shorts where guests can ride a 760-foot waterslide around the ship before splashing into the lazy river.

There will also be an immersive family experience through Disney's Uncharted Adventure.  The first of its kind will take guests through an interactive storytelling experience around the ship.  Guests will join Captain Minnie and Captain Mickey along with other characters to use their mobile devices as an "enchanted spyglass" to embark on quests and navigate the ship to uncharted worlds. 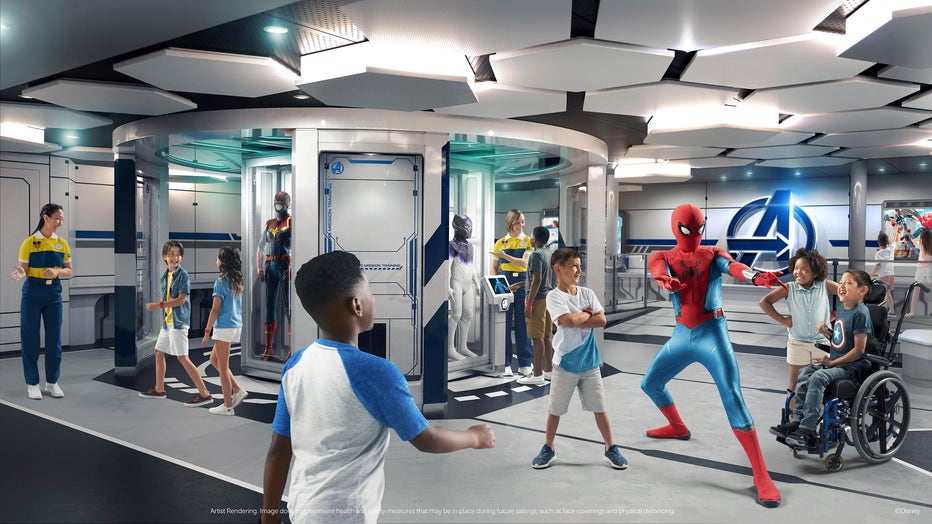 Marvel Super Hero Academy is a high-tech Avengers headquarters where kids ages 3 to 12 will train to be the next generation of Super Heroes with the help of their own heroes, like Spider-Man, Black Panther, Ant-Man and the Wasp (Disney handout)

Children, ages three to 12, are invited to join the Marvel Super Hero Academy where they will train alongside some of their favorite superheroes such as Black Panther and Spider-Man.  Children will be able to pick their own super suit and battle Marvel's most infamous villains.

Star Wars Galactic Creature Keepers is an interactive space adventure where kids can feed life-like space creatures and use the force to help Rey and Chewbacca save the ship. 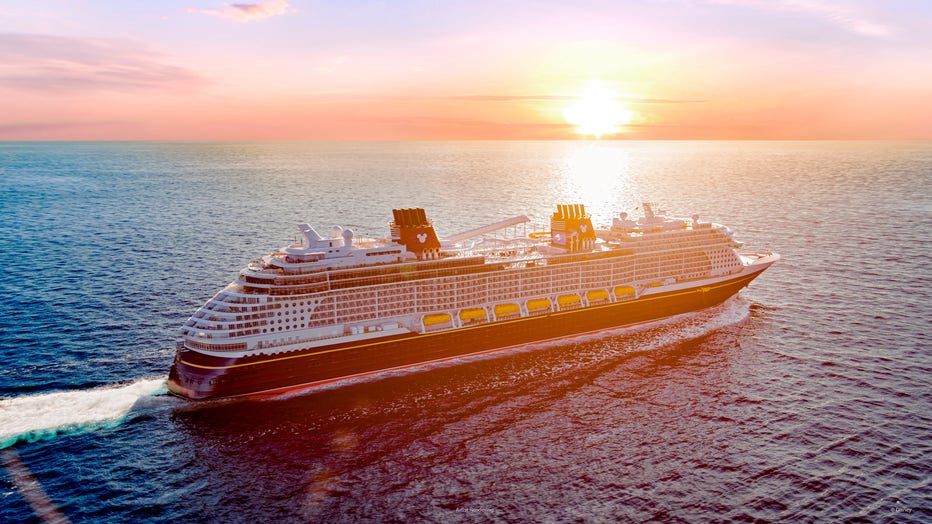 At the Walt Disney Imagineering Lab, kids will learn what it takes to create their own Disney attraction.  After designing their own roller coaster, kids will be able to ride it through a virtual reality simulator. 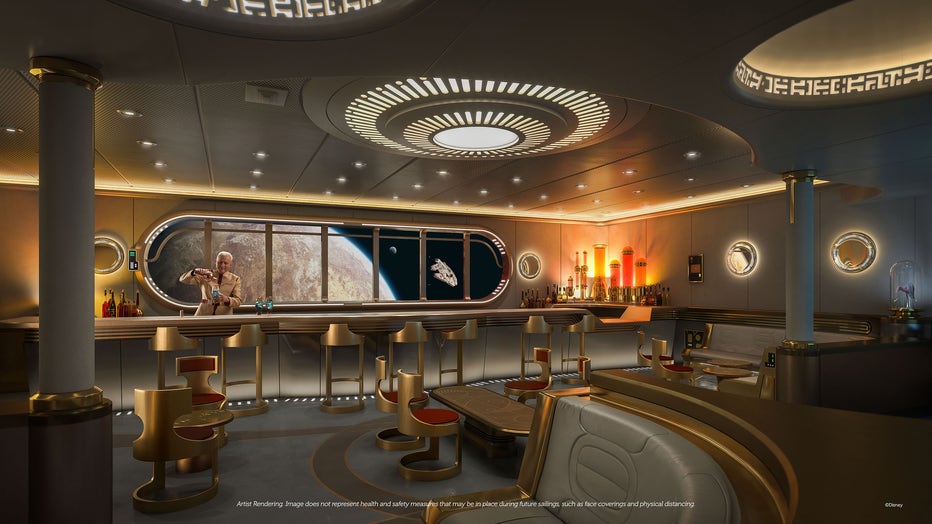 For the first time on a Disney ship, guests will embark on a space-jumping tour of the Star Wars galaxy at Star Wars: Hyperspace Lounge, a high-end bar styled as a luxurious yacht-class spaceship. This richly themed, immersive experience will be rese

At the Star Wars Hyper Space Lounge, families can sit back and relax as they travel through the Star Wars galaxy during the day.  At night, the lounge turns into an adult-only interactive tasting experience with signature drinks inspired by the films.

RELATED: Disney Wish: How much it will cost to cruise on new ship

Quiet Cove is an adults-only space on the upper deck that includes a bar, infinity pool, and a lounge where adults can get away on vacation.

Hook's Barbary is an upscale salon where adults aged 21 and older can experience Captain Hook's private quarters from the movie Peter Pan.  Guests can enjoy drink tastings at a hidden bar in the salon including whiskey, bourbon, and rum.

Adults can relax in sophistication at Cove Cafe and taste a variety of coffee and teas during the day.  At night, the lounge offers cocktails and wine for guests.

The Rose is a Beauty and the Beast-inspired adults-only lounge where guests can experience the enchanted castle from the film.

What shows can you see on Disney Wish?

Guests can sit back and enjoy a Broadway-style show of the 1989 animated film, The Little Mermaid.  The show is one-of-a-kind according to Disney Wish and is told through innovative theatrical production.  Other shows include Disney Seas the Adventure and Disney's Aladdin – A Musical Spectacular.

Guests can also enjoy comedy shows, live music, and family game shows at Luna, the new entertainment room.  Movies will be shown in the Wonderland Cinema and Never Land Cinema that is inspired by Alice in Wonderland and Peter Pan.

What restaurants are on board? 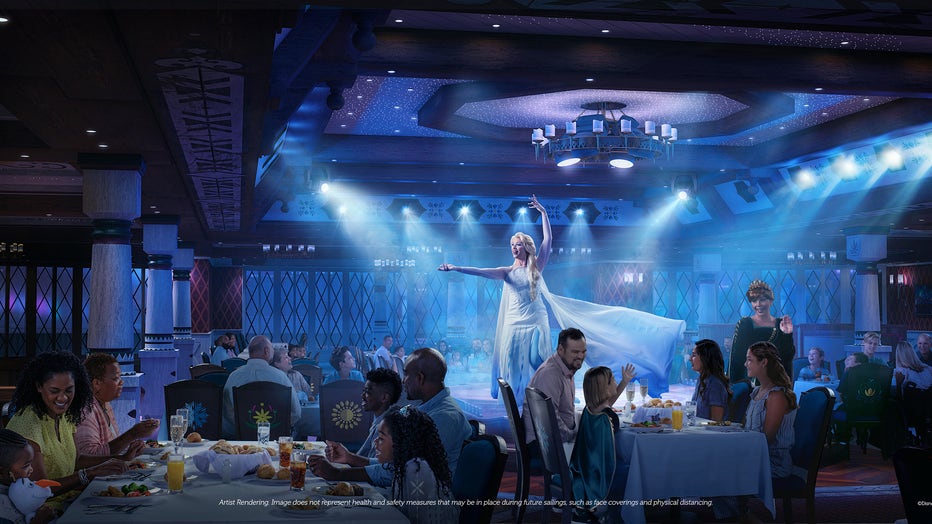 In the world's first Frozen-themed dining hall, guests can celebrate Anna and Kristoff's engagement with Norwegian-style food with special musical performances by Elsa and Olaf.

Children, ages three to 12 can enjoy a picnic-like dining experience alongside Anna, Elsa, Olaf, and Kristoff from the movie Frozen.

With a menu inspired by the Marvel Cinematic Universe, guests can enjoy foods from all over the world.  The restaurants will host a demonstration called "Avengers: Quantum Encounter" where guests can shrink and grow objects with the push of a button.

Travel back in time to when Walt Disney Studios was founded.  The upscale restaurant allows guests to dine on California-inspired food surrounded by sketches, props, and storyboards from the early days of animation.

As one of the restaurants inspired by the film Beauty and the Beast, Enchanté offers French-style cuisine for their adult-only venue.

Dress to impress at the adults-only restaurant based on Cogsworth from the Beauty and the Beast movie.  Guests will find a menu of delicacies ranging from a traditional steakhouse and Italian fare.

Inside Out: Joyful Sweets

Guests can satisfy their sweet tooth at the dessert shop inspired by the Disney and Pixar animated film Inside Out.  The shop has a wide variety of desserts and candy including gelato, candy-filled chocolate ‘memory orbs’, and cupcakes based on the characters in the movie.

What else is there to do on Disney Wish?

There are many other activities and events on board Disney Wish, including:

For more information on Disney Wish and how to purchase a trip, visit the Disney Wish Website.