LAKE MARY, Fla. - Hurricane Ian made landfall off the southwestern coast of Florida Wednesday afternoon as an "extremely dangerous" Category 4 hurricane – making it the fourth most powerful hurricane to hit the state.

The storm made landfall at 3:05 p.m. near Cayo Costa with sustained maximum winds of 150 mph, according to the National Hurricane Center. Radar imagery captured the moment the eye moved ashore Wednesday afternoon.

Gov. Ron DeSantis said Wednesday afternoon that more than 1.1 million electric customers had lost power because of Hurricane Ian — and the number is expected to grow. "This was a big one. I think we know there’s going to be major, major impacts," DeSantis said during a media briefing at the state Emergency Operations Center.

Views from a balcony in Fort Myers, Florida, show the severe flooding Hurricane Ian has caused after making landfall in the state as a powerful and "extremely dangerous" category 4 storm. Becky Hinshaw tells FOX 35 News the bottom floor of the building she's in is under water and vehicles are gone.

"This storm is doing a number on the state of Florida," DeSantis said. "It’s going to continue to move through the state through today and much of tomorrow [Thursday]. And there’s going to continue to be a number of adverse effects. I can tell you that as soon as it moves beyond Southwest Florida, you’re going to see a massive surge of personnel and supplies to be able to help those who are in need, get people back on their feet to rebuild those communities."

Strong winds from the storm – even though its eye is about 200 miles away from Tampa Bay as of 9 a.m. – are pushing water out of the bays and bayous, including Hillsborough Bay along Bayshore Boulevard and the Intracoastal areas in Pinellas County.

Tampa Bay had been preparing for a direct hit from Hurricane Ian for several days, but the area was spared some of the strongest winds and deadly storm surge.  In fact, a reverse storm surge took place as water and Ian pulled water out of the bays and bayous, including Hillsborough Bay along Bayshore Boulevard and the Intracoastal areas in Pinellas County.

Where is Hurricane Ian headed?

Ian is expected to remain a strong system as it crosses the state and exits into the Atlantic Ocean around Daytona Beach late Thursday.

Forecasters said the storm is expected to weaken to a Category 1 hurricane or very strong tropical storm by the time it arrives in the Orlando metropolitan area early Thursday morning. Then it will move off the Florida East coast on Thursday evening into Friday morning. 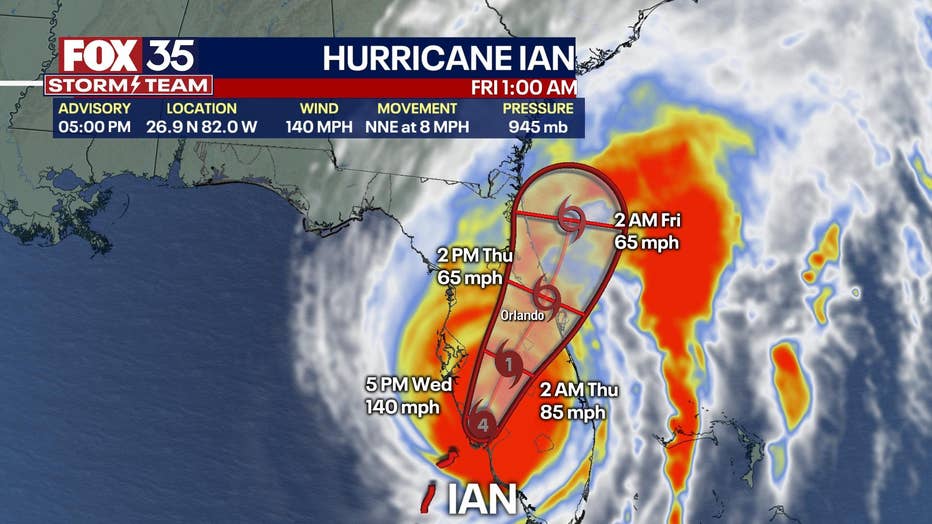 Major flooding is expected in Northeast Florida along the St. Johns River, hundreds of miles from where Ian made landfall. Data from a U.S. Air Force Reserve reconnaissance flight indicated Ian’s maximum sustained winds were near 150 mph at landfall. The top sustained wind speed was down to 140 mph as of 5 p.m. Heavy rains are expected to spread across the peninsula through Thursday, with "life-threatening" flooding expected across portions of Central Florida. Tornadoes are also possible.