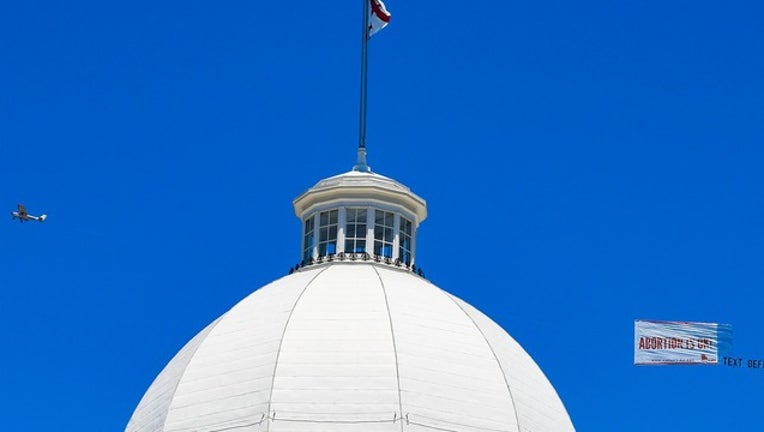 An airplane displaying a banner reading "Abortion Is OK" circles the Alabama State Capitol on May 15, 2019 in Montgomery, Alabama. (Photo by Julie Bennett/Getty Images)

MONTGOMERY, Ala. (AP) - Hundreds of demonstrators have marched to the Alabama Capitol to protest the state's new abortion ban.

Protesters chanted "My body, my choice!" and "vote them out!" as they rallied Sunday evening, days after Gov. Kay Ivey signed the near total abortion ban into law.

The Alabama law, the nation's most restrictive, is to take effect in six months. It bans abortion in almost all cases unless necessary because of a mother's health. There are no exceptions for pregnancies involving rape and incest.

Planned Parenthood and the American Civil Liberties Union say they plan to sue the state to try to block the law's implementation.

Alabama and other states are enacting abortion restrictions in hopes of getting a conservative-leaning U.S. Supreme Court to revisit the 1973 decision that legalized abortion nationwide.