For the second weekend in a row, supporters of President Donald Trump gathered in Milwaukee to call for an audit of the 2020 presidential election.

MILWAUKEE - For the second weekend in a row, supporters of President Donald Trump gathered in Milwaukee to call for an audit of the 2020 presidential election.

The second time around, though, things ended abruptly. When the Milwaukee Health Department showed up to the large gathering at Serb Hall, things quickly escalated.

"I don’t want to lose graciously, I tell you what. I want to win ugly! I don’t care how," said Vicki McKenna, a Trump supporter.

Roughly 1,000 supporters of the president gathered outside of the banquet hall on Milwaukee's south side Saturday afternoon. 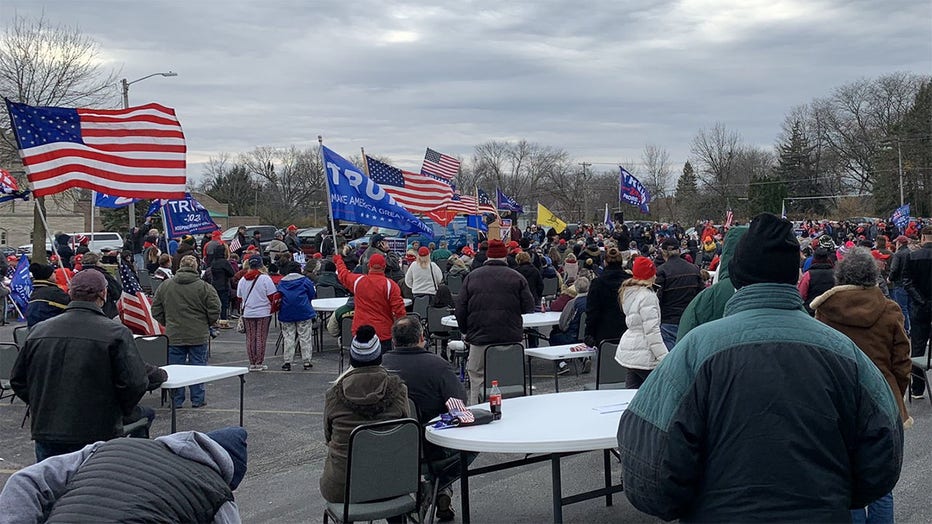 A violation of the city's public health guidelines amid the COVID-19 pandemic, the health department showed up. When officials asked the group to sit down, they stood up and chanted "USA."

It did not take long for a Serb Hall representative to grab a microphone.

"The City of Milwaukee is here. I’m not going to lose our license. I will stop the rally if you don’t sit down. Sit down," the representative said.

Things happened quickly from there. Sound equipment was packed up, and the tables and chairs were put away. The Serb Hall representative was pulled to the ground by members of the crowd.

Representatives of the city health department waved at the camera while being screamed at. One man shouted "idiots" at them.

No longer welcome at Serb Hall, the group took its message to the streets, shutting down the intersection of 51st and Oklahoma. At times, the group argued with counter-protesters.

FOX6 News reached out to Serb Hall for a formal comment but has not heard back.

A Milwaukee Health Department representative said in a statement:

"The health department reached out to Serb Hall yesterday to make sure they knew the rules. For political events, the max capacity is 100 people. For a licensed bar (or)n restaurant, people must be sitting down and wearing masks."

Health officials said two health inspectors were sent to follow up and it appeared "all regulations were being violated." One health inspector was pushed but not injured.

The health department representative said Serb Hall will receive several $500 citations for the event, "because there are no more warnings."