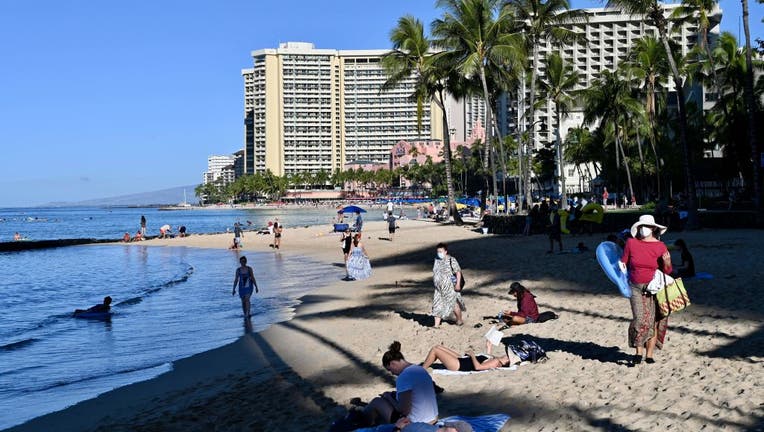 No states will require masks indoors after 11:59 p.m. March 25. Hawaii is the last to drop the pandemic safety measure, with indoor mask mandates in Oregon and Washington state expiring at 11:59 p.m. Friday.

Ige said Hawaii's COVID-19 case counts and hospitalizations are decreasing. The seven-day new case average is about 140, he said, while a week ago it was more than 300. There were 48 patients hospitalized with COVID-19 on Tuesday. He said that's the first time the number has been under 50 since around last summer.

He said he expects the downward trends to continue.

Since April 2020, the state of Hawaii has required face masks. At first, it was both indoors and outdoors.

Ige, a Democrat, said Hawaii's culture of caring for others, especially kupuna, or older people in Hawaiian, helped the state tolerate the mask rule for so long.

Sen. Kurt Fevella, the lone Republican in the state Senate, said he gives credit to the governor for not lifting the mandate sooner, even though he knows many of his constituents are ready to take their masks off.

"People would come up to me and tell me to take the diaper off my face," Fevella said. "People being rude and disrespectful ... doesn't help anybody."

When people make those kinds of comments, he explains that he wears a mask to protect his 83-year-old father who lives with him.

He said when the mandate ends, he and his family members will continue wearing masks depending on the circumstances.

"If we don't know the crowd we're with, we'll wear the mask," he said.

The end of the mask mandate coincides with when Hawaii plans to lift its COVID-19 quarantine requirement for travelers. Starting March 26 those arriving from other places in the U.S. won’t have to show proof of vaccination or a negative test to avoid sequestering themselves for five days.

Ige said these rules have contributed to Hawaii having among the lowest rates of COVID-19 in the country.

"It was so strict there. Pretty much everywhere we went we had to wear masks," she said. "It makes sense for them. It's an island. I totally get it. You don't have a lot of hospitals."

Kauai resident Sheila Herr said she will continue wearing a mask when indoors around people, like at the grocery store, even if it's not mandatory.

"The majority of my friends on Kauai agree that we should wear masks to protect each other," she said.

"Some will do it out of an abundance of caution. Others because they are at risk," she said. "So please encourage those who feel more comfortable wearing masks to continue to do so."

Lt. Gov. Josh Green, an emergency room physician on the Big Island, said he recommended Monday that the governor and health department lift the mandate on or before March 25.

"The governor and the director of health are very conservative and it has benefited us because we’ve got the lowest case rate and the second lowest mortality rate in the country," Green said.

But he said he's now worried about the "collateral" effects of pandemic restrictions such as depression and alcohol abuse.

"It’s important that we begin to move toward normal because there are other considerations like people’s mental health," he said.