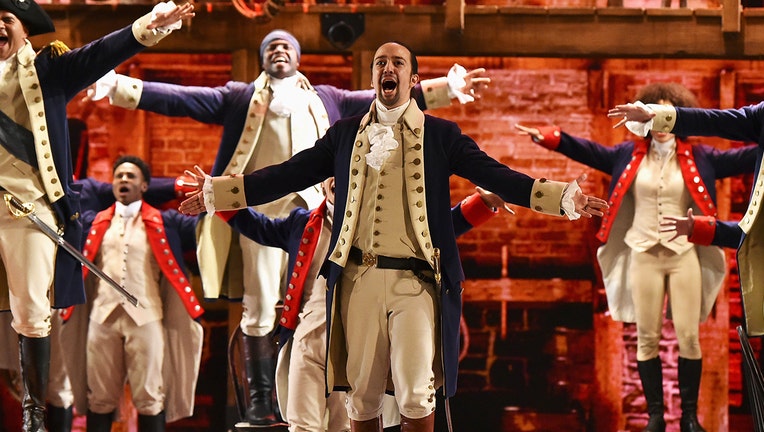 'Hamilton' is going to take its shot on Disney+.

Lin-Manuel Miranda’s Broadway smash “Hamilton” will land on Disney + on July 3, 2020 -- just in time for America's birthday and more than a year earlier than expected.

"The original Broadway production of Hamilton filmed LIVE onstage at the Richard Rodgers Theatre, is now coming exclusively to #DisneyPlus this July 3rd," Walt Disney Studios tweeted on Tuesday. "Shout it to the rooftops!"

The production was filmed at the Richard Rodgers Theatre in New York prior to the departure of the original cast, which included Miranda in the title role, Leslie Odom Jr. as Aaron Burr, Christopher Jackson as George Washington, and Daveed Diggs as Marquis de Lafayette and Thomas Jefferson.

The filmed version of the rap-infused look into the life of Alexander Hamilton was originally slated for a theatrical release on Oct. 15, 2021. However, because of the coronavirus pandemic, the film will now be released exclusively on Disney+.

According to the press release, the show was filmed in July 2016 with the original cast at The Richard Rodgers Theatre on Broadway.

“I’m so grateful to Disney and Disney+ for reimagining and moving up our release to July 4th weekend of this year, in light of the world turning upside down," Miranda said. "I’m so grateful to all the fans who asked for this, and I’m so glad that we’re able to make it happen. I’m so proud of this show. I can’t wait for you to see it.”

According to Variety, Disney paid $75 million for the rights to a filmed rendition.

For many, this will be the first time they have had a chance to see 'Hamilton' considering the record-breaking ticket sales it has seen. The demand for tickets to the show when it came to the Dr. Phillips Center for the Performing Arts in Orlando in 2018 was so great that it crashed the venue's system. 'Hamilton' is currently on schedule to come back to Orlando on May 4–30, 2021.