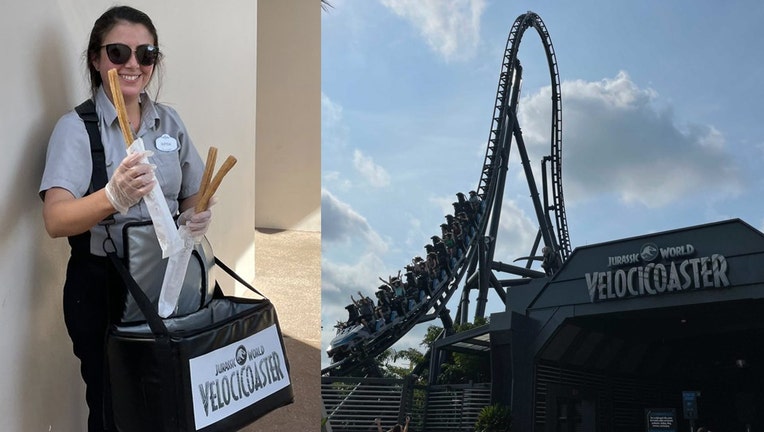 While the attraction has been allowing riders to preview the ride since last month, the roller coaster had its official opening on Thursday. Crowds lined up bright and early to check it out. Universal Parks News Today reported that the line to get on was backed up all way to the King Kong ride at one point.

Universal Orlando Resort previously described the thrill ride as "a series of intense maneuvers that will send guests catapulting up to 70 mph and more than 150 feet in the air with the swiftest of prehistoric predators."

From the moment you enter, riders will be confronted by Velociraptors the blockbuster "Jurassic World" films – including fan-favorite Blue, along with Charlie, Delta and Echo – as they prepare to join the hunt alongside the ferocious pack in an epic, high-speed coaster chase.

RELATED: FOX 35 gets inside Jurassic World's VelociCoaster at Universal's Islands of Adventure

Inside the queue of Jurassic World: VelociCoaster

Guests will be able to peer into the Raptor paddock while venturing through the queue – and watch the hunt they are about to embark on unfold before their very eyes. Red flashing lights and a loud rumble will draw guests to a collection of adjacent windows, where they’ll witness the physical coaster roaring by at exhilarating speeds of 70 mph with the Raptor pack in hot pursuit.

Next up in the queue are the stables, where the scent of wet dirt and vegetation from the paddock permeates the air, meaning one thing – Velociraptors are near. Here, they’ll come across Delta and Echo, who will scan the room, studying riders as they pass by – occasionally testing the limits of the grooming stations currently restraining them. This awe-inspiring moment will be the first face-to-face encounter guests will have with the Raptors – and they’ll be so close, guests will even feel their breath.

Then, the hunt officially begins as guests board ride vehicles and take off on an intense coaster adventure where they’ll narrowly escape Blue, Charlie, Delta and Echo as they twist, turn and soar through the paddock.

And then finally, a rider tip: a VelociCoaster team member told FOX 35 News that riding in the front row offers the best view, but you'll feel the twists and turns of the ride more in the very back row. He also said to make sure you put your hands in the air during the barrel roll!