LAKE MARY, Fla. - Isaias remains a tropical storm after it was downgraded Saturday afternoon, as it continues to move closer to Florida's east coast, bringing along a risk for severe weather.

A FOX 35 WEATHER ALERT DAY is in place for the whole weekend.

In its 2 a.m. advisory on Sunday, the National Hurricane Center (NHC) said the storm is moving northwest at 8 mph with maximum sustained winds of 70 mph. 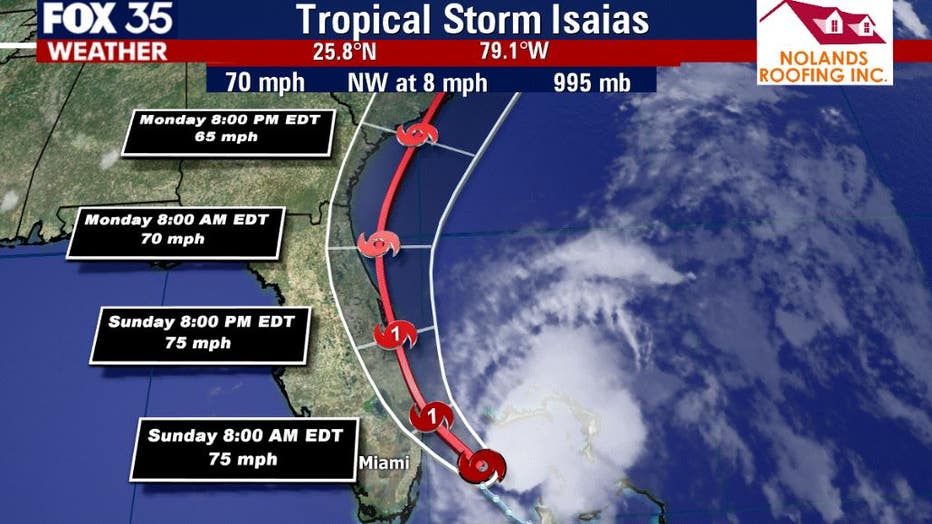 Isaias remained a tropical storm late Saturday, but it is expected to strengthen on Sunday.

He said the storm could regain its strength as a Category 1 hurricane before making landfall on Sunday.

"The brand new computer model brings the center of Isaias up Interstate 95, with 81 mph winds out at Port Canaveral," Richards said. "Please, if you're along the coastline, you need to take precautions. Inland, we're expecting some damage as well with possible power outages. All of this begins to ramp up for our viewing area late Sunday morning."

Sustained winds near Orlando are expected to be around 40 mph at the peak, with gusts near 50 mph.

Hurricane Warning is in effect for:

Storm Surge Watch is in effect for:

Tropical Storm Warning is in effect:

RELATED: Here's where you can get free sandbags in Central Florida

Governor Ron DeSantis declared a State of Emergency for Friday ahead of the system's arrival.

Gov. DeSantis sent a letter to President Trump requesting that he declare a pre-landfall emergency for the State of Florida.

Saturday afternoon, DeSantis gave an update on the storm.

The governor says the state is “fully prepared for this and any future storm during this hurricane season,” with stockpiles of personal protective equipment, generators, bottled water and meals ready to be distributed.

But, he urged that people have seven days of food, water, and medication on hand and said state-run coronavirus testing sites in the areas where the storm could hit would be closed.

The eye of Isaias was observed from above on the morning of July 31 by a crew aboard a National Oceanic and Atmospheric Administration (NOAA) aircraft.

A video of the eye of Hurricane Isaias was taken by NOAA Hurricane Hunters via Storyful on Friday.

Isaias is the second hurricane of the 2020 Atlantic hurricane season.