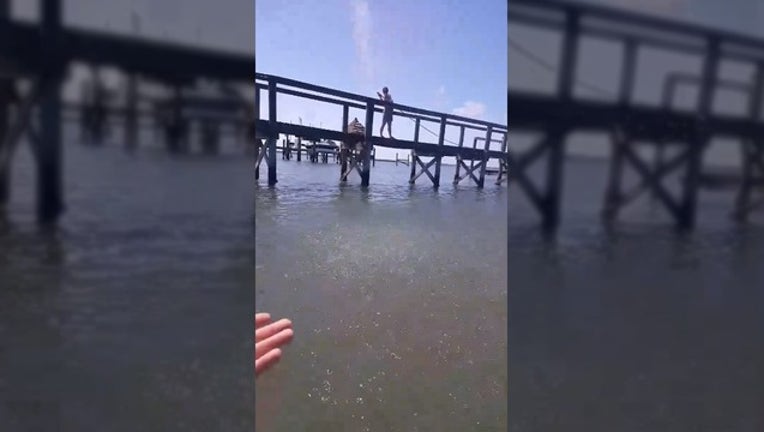 VERO BEACH, Fla. (FOX 35 ORLANDO) - A fight over where a Florida man can fish is going viral after the man, Jose Ortiz of Melbourne, claimed that the pier's owner sprayed him with a hose because she also owns the water near the pier.

Fox 35 spoke to Jose about the incident. He said that he was fishing at Vero Beach when the incident occurred. He claimed to be standing in the water about 20 to 30 feet away from a pier owned by a woman named Joyce.

He said that Joyce eventually came out onto the pier and shouted nasty things at him. He said that she told him to "go back to your country" and that "you don't belong here." Jose refused to leave though and told her to call the police if his presence was an issue.

Joyce then grabbed a water hose and sprayed him, Jose told Fox 35. This encounter was captured on video.

In the video, you can see Joyce and Jose going back and forth. Joyce claimed to own the part of the water that Jose was standing in, to which Jose said "Impossible. You don't own the water sweetheart. Your property line is not in the water."

Despite saying that she is not going to argue, the video showed Joyce grab a water hose and spray Jose. Still filming the interaction, Jose asked her what her name was. She said that it was "Pepé Le Pew." Jose responded with "Pepé Le Pew? You probably stink too."

Joyce continued to spray Jose. In the video, Jose is heard saying "that's okay. I like the water. It doesn't bother me. I'm not pathetic. Do you feel better about yourself?"

Joyce then called Jose a "loser" and told him that he "can't buy your own property." The two continued to exchange a back and forth, with Joyce even telling him at one point "don't be jealous."

Jose is heard in the video telling Joyce that he has been "fishing at this pier for 20 years, you're the first person to ever complain." The video ended with Joyce telling him "you're going to jail."

The full video can be seen below.

Jose said that deputies eventually showed up to the pier and instructed him to leave. They stated that he could keep fishing, but not there.

Jose went on to tell Fox 35 that the Florida Fish and Wildlife Commission (FWC) is investigating this incident, as Joyce actually did not own the water under the pier. He elaborated and said that the FWC wants to charge her with battery.

A Facebook page titled 'Fish Joyce's Dock' was created regarding this incident. The page has over 7,000 likes. It also has an event page with the same title. Jose says that on Saturday, 400 to 800 boats are going to surround Joyce's dock.