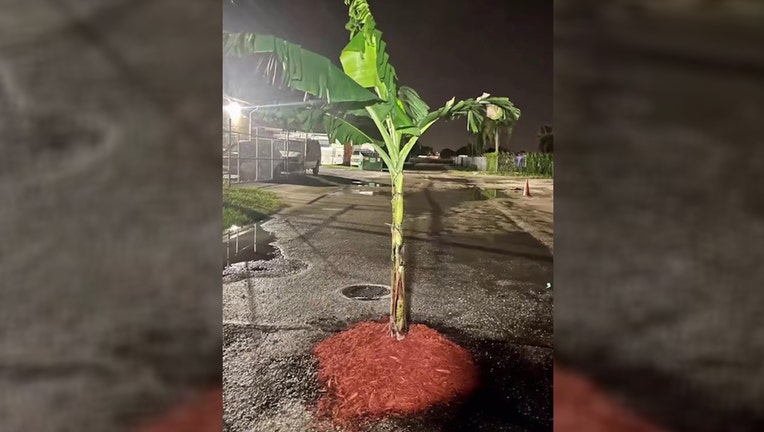 FORT MYERS, Fla. - A man fed up with a private road in poor condition near his southwest Florida business has a novel solution: plant a banana tree in a pothole to warn motorists away.

Last week, Bryan Raymond planted the tree in a stubborn pothole along Honda Drive just off U.S. 41 in south Fort Myers. Raymond, who owns Progress and Pride Fitness Group, said the idea of planting a banana tree ripened in his mind after having to fill holes in the street with cement multiple times.

Because Honda Drive is a private street, county officials said, it’s up to the business owners to maintain the street.

TRENDING: Here's what a Disney World ticket cost when it opened in 1971

For Raymond, the banana tree is an attention-grabbing repair.

For some time, Raymond’s security cameras have captured problems along the street, including a pothole damaging cars and floodwaters causing his trash bin to float away.

Some who work along the road say anything is better than potholes.

"I love it, I think it’s hilarious. We should have more of these," said Scott Shein, who works at a nearby business, told WBBH. "I think it is sending a message."

He’s seen so many cars hit a pothole on the street and "bottom out" that it’s a real concern.

Charlie Lopez, who lives in nearby Cape Coral, agrees.

For some, though, the sight of a tree brings disbelief.

"I pulled up and I’m like, is that really a tree in the middle of the road?" said John Hulker, who lives in Fort Myers, speaking with WINK-TV.