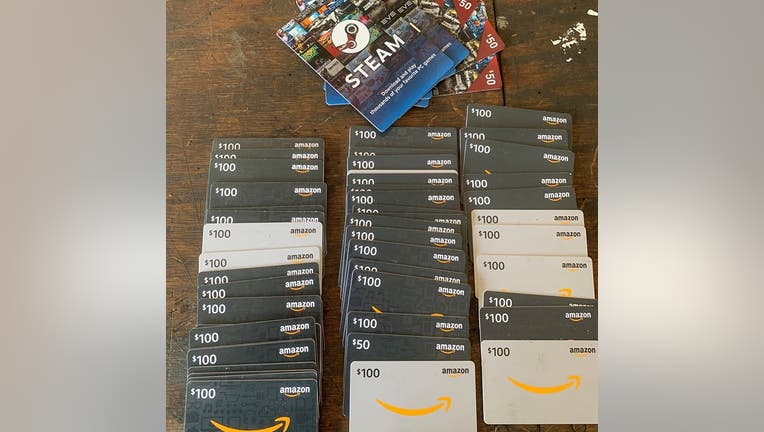 FLAGLER COUNTY, Fla. - The Flagler County Sheriff's Office is warning residents about a gift card scam targeting those in need of income during the coronavirus pandemic.

Deputies say that on May 15, a woman answered an advertisement on a neighborhood website where people buy and sell items. A post by someone named "Gilbert Neil" advertised a paid work from home job “during a world pandemic.”

"The woman contacted Gilbert and Gilbert gave her the email address of Gilbertneil65@hotmail.com and a phone number of 401-777-7434 to make contact with him," the sheriff's office wrote. "Gilbert claimed to be a doctor and a businessman, who also sells antiques."

The woman said he offered to pay her $500 a week to run errands for him, but he needed her to start immediately.

"He told her to purchase $6,000 worth of Amazon.com gift cards, reveal the gift card numbers and email them to him."

The sheriff's office says the woman went to the store and purchased over 50 gift cards which totaled $6,000 and emailed photos of the gift card numbers to Gilbert.

After the woman alerted authorities to the scam, a deputy called "Gilbert's" phone number and says he immediately hung up.

Gilbert then reportedly texted the woman and said “I am not American.”

“There were many red flags during this interaction, but it is very sad that someone would prey on people during this pandemic,” Sheriff Rick Staly said. “We previously warned the community of COVID-19 scams and unfortunately we now have a victim of one. Please protect yourself from becoming a victim by never giving out personal or financial information and never agreeing to pay any sum of money by way of gift cards or pay in advance for employment. Those are clear indications that it is likely not legitimate.”