Haunting video was shown in court Thursday of Ethan Crumbley at the shooting range with his mom, Jennifer – practicing, with the same gun used in the Oxford High School shooting.

PONTIAC, Mich. - New details about the mental state of Ethan Crumbley, the alleged Oxford High School shooter, were revealed in troubling text messages read during the ongoing preliminary hearing for his parents, who are also facing involuntary manslaughter charges.

His parents, James and Jennifer Crumbley, were each charged with four counts of involuntary manslaughter days after their son was arrested in the Nov. 30 shooting — which left four students dead and seven others seriously hurt.

The second day of a preliminary exam on Thursday kicked off with testimony about the thousands of text messages sent between Ethan Crumbley, now 15, and a friend prior to the mass shooting.

In an exchange on April 5, 2021, prosecutors described "quite a bit" of discussion about his mental state in which Ethan Crumbley told his friend he was "f----- up," experiencing hallucinations, and had asked his parents for help.

"Now my mom thinks I take drugs," one text read, according to the prosecutor. "She thinks that’s the reason why I’m so mad and sad all the time, and she doesn't worry about my mental health. They make me feel like I’m the problem."

Another text from Ethan Crumbley to his friend indicated that he had asked his father, James, "to take me to the doctor but he just gave me some pills and told me to suck it up," the prosecutor read during the hearing.

At one point, Ethan told his friend in a text: "I need help. I was thinking of calling 911 so I could go to the hospital but then my parents would be really pissed," according to the exchange read in court.

On Tuesday in court Oakland County Prosecutor Karen McDonald presented a school phone call to the parents of Ethan Crumbley one day before the shooting as well as disturbing phone text messages.

Detective Edward Wagrowski from the Oakland County Sheriff's Office continued his testimony from the first preliminary hearing on Feb. 8. Wagrowski discussed details from thousands of text messages, social media accounts, and phone calls that authorities recovered during the investigation.

Oxford High School counselor Shawn Hopkins also testified about the steps taken after a teacher discovered disturbing drawings on math homework, which depicted a handgun and the words: "The thoughts won't stop. Help me." It also depicted is a bullet with the words "blood everywhere" above a person who appeared to have been shot twice and bleeding. A laughing emoji was drawn below the figure. The note also read, "my life is useless" and "the world is dead."

Hopkins testified that he met with Ethan to discuss the homework and assess his mental state. During this conversation, Ethan told the counselor of the drawings: "I can see why this looks bad. I’m not going to do anything," Hopkins testified.

Hopkins said he "was concerned about suicidal ideation" in Ethan and the Crumbley parents were eventually summoned to the school for a meeting around 10:30 a.m., just a couple of hours before the shooting.

"It was different than other meetings I’ve seen. They weren’t friendly or showing care to their son," Hopkins told the court, noting how the couple didn’t greet, hug or touch their son when they arrived.

Jennifer and James Crumbley were shown the note and advised that Hopkins was concerned for his well-being. Hopkins testified that he didn’t recall Jennifer speaking to her son during the estimated 15-minute meeting and that James looked over the math assignment with Ethan and told him, "you have people you can talk to."

The counselor testified that he told the couple Ethan needed mental health support "as soon as possible, today if possible." But he noted that Jennifer said she had to return to work that day and it wouldn’t be possible within that timeframe.

"I was taken aback by that," the counselor testified. He added that he then told the parents, "I want him seen within 48 hours. I’ll be following up."

Ethan returned to class following the meeting. At 12:51 p.m., he allegedly emerged from a bathroom with the gun his father had bought four days before and began firing at students in the hallway, according to prosecutors.

Five witnesses testified during the first preliminary hearing, which included the caretaker of the Crumbley's horses who texted with Jennifer the day of the shooting. Three employees from Jennifer's workplace also testified, including her boss in whom she confided, saying "he's going to kill himself. He must be the shooter. I need a lawyer. Ethan did it."

In another text, Jennifer allegedly asked her boss not to judge her for "what my son did."

The ongoing preliminary exam for the Crumbley parents came two days after Ethan Crumbley appeared in court to decide whether the Oakland County Jail is the proper place for the teenager. James and Jennifer are also housed in the jail but do not have access to him.

Assistant prosecutor Markeisha Washington said during that Feb. 22 hearing that Crumbley had a plan to stalk, rape, torture and ultimately kill a classmate and that he wrote that he admired Adolph Hitler and Jeffrey Dahmer.

Additionally, the prosecution said his journal detailed plans to shoot students in the school and that he would surrender "so that he could witness the pain and suffering that he caused."

"Despite having no having documented juvenile history, the defendant's anti-social behavior is very concerning," Washington said in an opening statement. 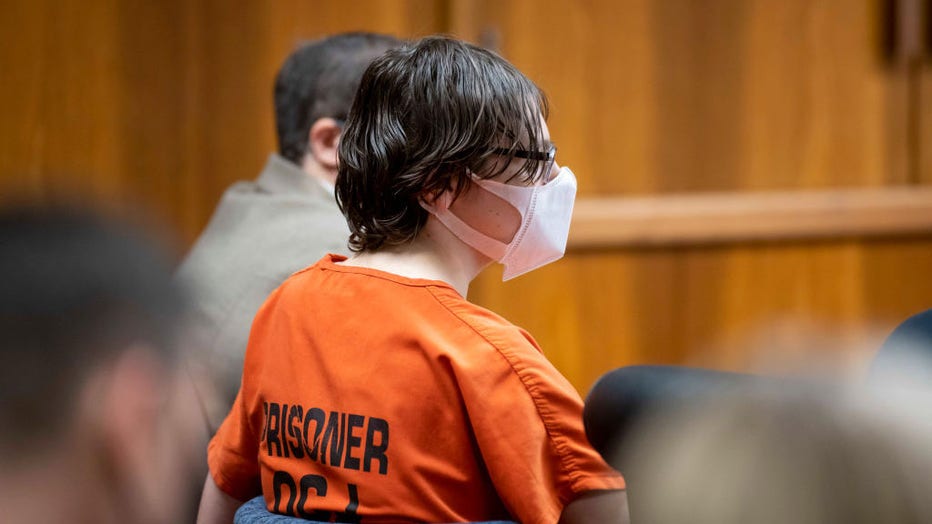 PONTIAC, MICHIGAN - FEBRUARY 22: Ethan Crumbley attends a hearing at Oakland County circuit court on February 22, 2022 in Pontiac, Michigan. . Crumbley, 15, is charged with the fatal shooting of four fellow students and the wounding of seven others,

Crumbley was charged as an adult with the murder of four students, identified as Tate Myre, 16, Madisyn Baldwin, 17, Hana St. Juliana, 14, and Justin Shilling, 17. According to authorities, Crumbley shot and killed the four students with a 9 mm Sig Sauer.

What is a preliminary exam?

A preliminary exam is when a judge will hear evidence presented by the prosecution. This includes documents, physical evidence, and witness testimony.

The prosecution presents the evidence but, according to FOX 2's Charlie Langton, this is actually a hearing that's used by the defense to find out what evidence the prosecution has and how well the witnesses will testify at trial, assuming it goes to trial.

The judge then decides what evidence will be allowed and if the suspects are bound over for trial. Most cases are bound over and Langton said he fully expects James and Jennifer to be sent to trial.

What are James and Jennifer Crumbley charged with?

The parents of Ethan Crumbley were each charged with four counts of involuntary manslaughter days after the Oxford High School shooting. Both were found early in the morning on Dec. 4 inside of art studio in Detroit, one day after they were supposed to have turned themselves into the Oakland County Sheriff’s Office.

After their arrest, they each were ordered held on a $500,000 bond. Their defense attorneys argued for a reduction in bond to $100,000, which was rejected.

The judge in the case ruled that the parents were flight risks, citing their actions on the day they were charged with involuntary manslaughter.

This story was reported from Cincinnati. FOX 2 Detroit contributed.