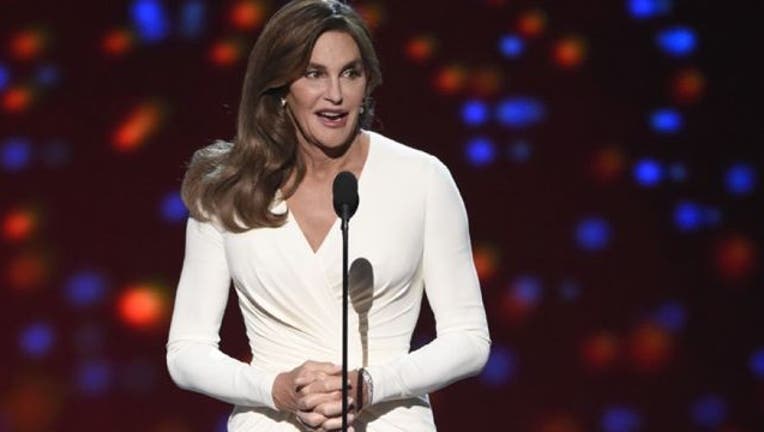 LOS ANGELES (AP) - Caitlyn Jenner accepted the Arthur Ashe Courage Award at the ESPYs on Wednesday night while urging acceptance for others who are transgender.

She received a standing ovation from some of the sporting world's biggest stars after her 10-minute speech during the annual awards honoring the year's top athletes and moments.

"This transition has been harder on me than anything I can imagine," said Jenner, who revealed she was in the process of becoming a woman in a televised interview with Diane Sawyer in April on ABC.

From the stage, Jenner thanked Sawyer, whom she called a friend.

Noting her powerful celebrity platform, the 1976 Olympic decathlon champion and current reality TV star vowed "to do whatever I can to reshape the landscape of how transgender people are viewed and treated."

Abby Wambach of the U.S. soccer team that won the Women's World Cup presented the trophy to Jenner, whose voice broke as she thanked members of her famous family, including stepdaughters Kim and Khloe Kardashian. Tears welled in the eyes of Jenner's younger daughter, Kylie, whose sister, Kendall, wiped a tear from her eye.

"I never wanted to hurt anyone else, most of all my family and my kids," said Jenner, wiping her eye.

She admitted that until earlier this year she had never met another transgender person.

The 65-year-old told the audience about trans teenagers who are bullied, beaten up, murdered or kill themselves. Jenner mentioned two people by name whose deaths particularly touched her.

"Trans people deserve something vital, they deserve your respect," she said. "From that respect comes a more compassionate community."

Jenner urged the crowd that included football, basketball, baseball and hockey superstars to remember what they say and do is "absorbed and observed by millions of people, especially young people."

"My plea for you tonight is one join me in making this one of your issues as well," she said.

Many in the crowd watched intently as Jenner spoke with little reaction on their faces.

"If you want to call me names, make jokes and doubt my intentions, go ahead because the reality is I can take it," she said. "But for thousands of kids out there coming to terms with the reality of who they are they shouldn't have to take it."

A video narrated by "Mad Men" actor Jon Hamm traced Jenner's life from the time when she was known as Bruce Jenner to her current transition. She mentioned she once considered ending her own life with a gun she owned.

She was shown applying makeup, buttoning her blouse in her closet and fastening the strap on her heeled shoes.

With her trembling hands clasped in front of her, Jenner joked with the audience about her struggle to select the cream gown she wore.

"OK girls, I get it," she said, as the audience laughed. "You've got to get the shoes, the hair, the makeup, it was exhausting. And the fashion police, please be kind on me. I'm new at this."

Jenner didn't walk the red carpet outside the Microsoft Theater in downtown Los Angeles, and she didn't appear backstage to talk with reporters, as most of the previous Ashe award recipients have done. ESPN said Jenner wanted her onstage comments to stand.

Reaction among Jenner's sporting peers on the red carpet was mixed.

"She's really brave to have the courage to get through a lot of those things," said the 14-year-old who won best breakthrough athlete. "I know a lot of people give her a hard time about it, but just for her family to give her that support is amazing."

RadarOnline.com reported Wednesday that Jenner's representatives approached ESPN suggesting the network give her the Ashe award in exchange for plugs on her upcoming E! docuseries. ESPN and ABC are owned by Disney.

Jenner's selection to receive the Ashe award named for the late tennis player who died in 1993 after contracting AIDS from a blood transfusion generated strong debate online.

"I met Arthur Ashe a few times. I know how important education was to him," Jenner said. "Learn as much as you can about another person to understand them as well as you can."

But Hill's mother, Lisa, attended the show and said her daughter would not have welcomed the controversy and made no judgment of others.