TALLAHASSEE, Fla. - Physician and researcher Joseph Ladapo was named Florida surgeon general on Tuesday, calling for being "done with fear" amid the COVID-19 pandemic that has killed more than 51,000 of the state’s residents.

Gov. Ron DeSantis held a news conference to introduce Ladapo, who has worked as an associate professor at UCLA’s David Geffen School of Medicine but recently received a professorship at the University of Florida College of Medicine.

Ladapo will replace former Surgeon General Scott Rivkees, whose final day in the job was Monday.

During the news conference, Ladapo echoed themes that DeSantis has used during the pandemic, including saying people should be allowed to make choices about their health care and objecting to mandates and lockdowns.

"We are done with fear," Ladapo said. "That is something that, unfortunately, has been a center point of health policy here in the United States since the start of the pandemic. It’s over here." 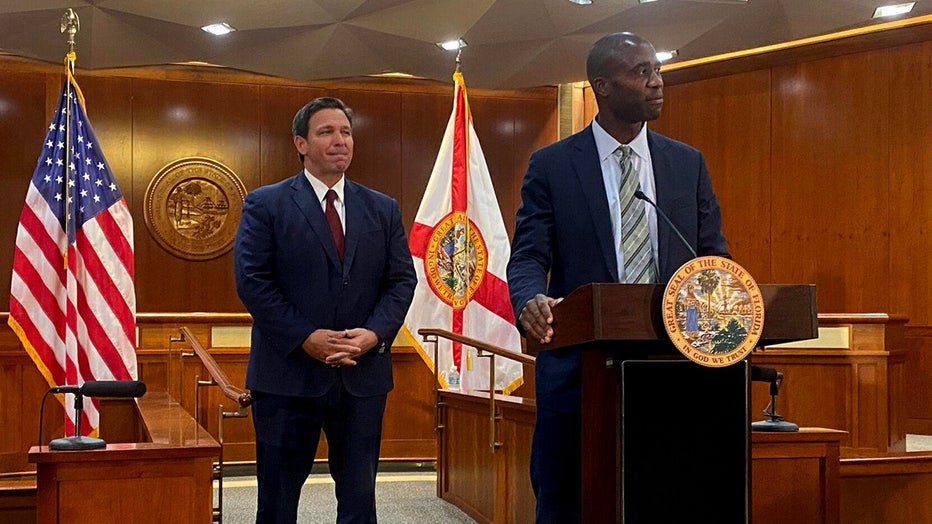 Ladapo also contended that science has been misused and that vaccinations are not the only answer to handling the pandemic.

Ladapo will take over the job after Florida became a hotspot for COVID-19 this summer, with the highly contagious delta variant spreading and vaccination rates remaining relatively low in swaths of the state. As of Thursday, Florida had totaled 51,240 deaths and nearly 3.49 million COVID-19 cases since the pandemic started in early 2020, according to a Florida Department of Health report.

While many conservatives have rallied to DeSantis’ approach to avoiding mandates, his positions on issues such as preventing school districts from requiring students to wear masks have been highly controversial.

After large increases in cases, hospitalizations and deaths in July and August, the state has seen lower numbers in September. For example, a federal report Tuesday showed that 8,448 people were hospitalized in Florida with COVID-19. Three weeks earlier, the state had 15,682 patients hospitalized.

Rivkees, who was chairman of the University of Florida College of Medicine’s Department of Pediatrics and physician-in-chief at UF Health Shands Children’s Hospital, was named surgeon general in spring 2019, a few months after DeSantis took office.

Lt. Gov Jeanette Nunez helped negotiate an agreement that allowed Rivkees to remain a tenured professor of pediatrics at the university and continue full-time employment. Under terms of the agreement, Rivkees was assigned to work as the Department of Health secretary, a position that doubles as surgeon general.

The contract was allowable under a law dealing with the transfer of public employees between agencies. But with positions appointed by the governor, such as the Department of Health secretary, the law limits the length of such intergovernmental transfers to two years, with up to a three-month extension allowed.

DeSantis indicated Tuesday that Ladapo will work under a similar arrangement with the university. Ladapo’s research has focused on cardiovascular issues, according to information on the UCLA website.

RELATED: DeSantis pledges to 'fight like hell' over monoclonal antibody treatment for COVID-19

Rivkees rarely took part in news conferences and worked more behind the scenes, but Ladapo was outspoken Tuesday about issues such as people making health choices.

"We need to respect human rights," Ladapo said. "People do have autonomy over their lives. It’s not OK, it’s not virtuous and it’s not right to just take away those rights from individuals."

DeSantis said Ladapo "understands there are no noble lies."