Florida Governor Ron DeSantis announced on Monday that any city or county that requires its employees to be vaccinated against COVID-19 will be fined thousands of dollars for each infraction.

TALLAHASSEE, Fla. - As he faces a re-election campaign next year, Gov. Ron DeSantis on Tuesday tried to dispel speculation that he is preparing to run for the White House in 2024.

During an appearance in St. Cloud to discuss monoclonal antibody treatment for people who become infected with COVID-19, DeSantis was asked by a reporter about the possibility that he and former President Donald Trump might run for president. Trump has been a political ally of DeSantis and helped get him elected governor in 2018.

"All the speculation about me is purely manufactured," DeSantis said. "I just do my job. We work hard. Obviously, our state has led on a lot of things, including on this (monoclonal antibody treatment) now. Other states are copying us. But that’s what it’s really all about, just helping folks here. I hear all this stuff and, honestly, it’s nonsense." 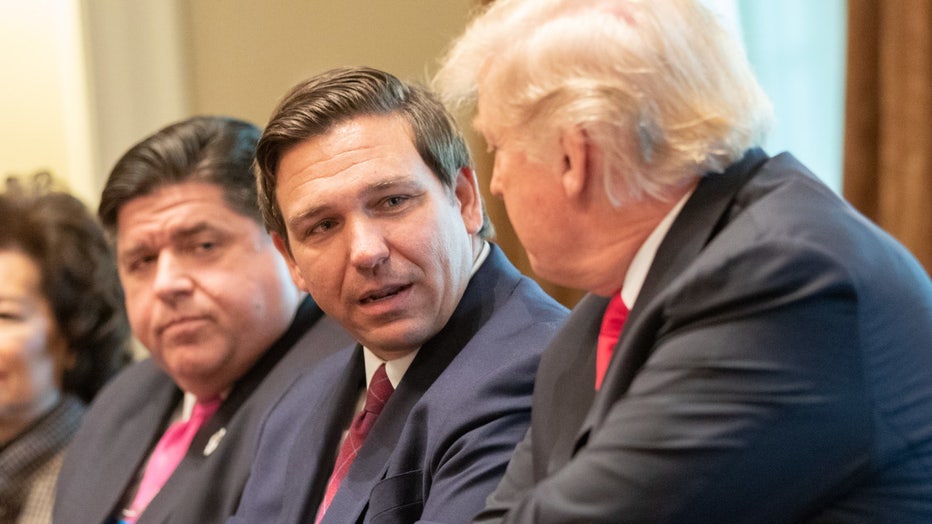 DeSantis has become a favorite of many Republicans nationally and has raised huge amounts of money. His political committee, Friends of Ron DeSantis, had about $48 million in cash on hand as of July 31 and continued to rake in contributions in August from across Florida and the country, according to state campaign-finance records and the committee’s website.

But at the same time, Democrats have sought to portray DeSantis as being more interested in his political future than in the needs of the state, particularly as Florida has faced a massive surge in COVID-19 cases caused by the highly contagious delta variant of the coronavirus.

"As COVID hospitalizations remain near all-time highs, Ron DeSantis went to New Jersey this weekend to raise money from a major Trump donor," a fundraising email from Fried’s campaign said.

Crist added in a tweet, "Retweet if you think it’s despicable for Ron DeSantis to abandon a Florida-in-crisis to go to a fundraiser in New Jersey."

Speculation has swirled recently about the possibility of Trump making a political comeback in 2024 and what that might mean for DeSantis and other potential Republican candidates.

RELATED: DeSantis: Florida cities, counties that require employees get vaccinated will be fined

DeSantis made his comments Tuesday a little more than a week after U.S. Sen. Marco Rubio, R-Fla., emphasized that he is focused on his 2022 re-election bid. Rubio made the comments while on his first trip to Iowa since he unsuccessfully ran for president in 2016.

"Having done this once, there's no purpose of being coy about it, I'm running for re-election in Florida to serve in the United States Senate," Rubio told reporters after a party fundraiser in Mason City, Iowa. "I'm not having any conversations about running for president, but I have friends here."

A short time earlier, during a question-and-answer session as part of the fundraiser, Rubio defended the use of ethanol and the Iowa caucuses remaining first in the nation as part of the presidential nomination process --- two major issues to Iowa voters.

"There's something to be said about the leader of the free world, a job of this responsibility and power, having to begin their campaign (in Iowa), oftentimes in a rented car, driving county to county speaking to groups of people 10 or 15 at a time," Rubio said. "There's very few places that you can get that in this country. … After that, you know, it becomes about the planes flying to multiple states. But that early experience, I think, is incredibly valuable in filtering and vetting out who ultimately makes it to be the nominee of the respective parties."