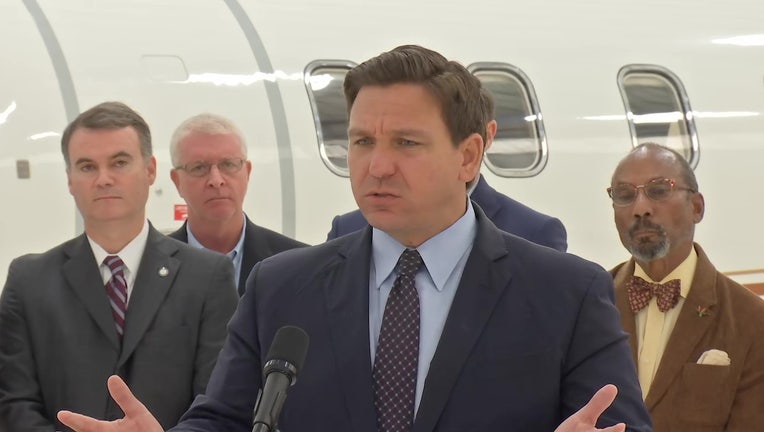 TALLAHASSEE, Fla. - With the state House and Senate needing to reach an agreement on a congressional redistricting plan, Gov. Ron DeSantis made clear to lawmakers Friday that he isn’t backing down on a sprawling North Florida district.

DeSantis, appearing in Jackson County, said his position on the constitutionality of the minority-access Congressional District 5 held by Democrat Al Lawson didn’t change when the Florida Supreme Court rejected his request for an advisory opinion about revamping the district.

"The court declined to take that up but acknowledged that these are, you know, really live issues and are unsettled," DeSantis said.

"We will not be signing any congressional map that has an unconstitutional gerrymander in it," DeSantis continued. "And that is going to be the position that we stick to. So, just take that to the bank."

The state Senate has already approved a congressional map that keeps District 5 close to its current configuration, which runs about 200 miles from Jacksonville to the west of Tallahassee. But DeSantis’ administration released a proposed map that would revamp the district, putting it only in Northeast Florida.

DeSantis on Feb. 1 sought an advisory opinion from the Supreme Court about redrawing the district, focusing, in part, on what is known as a "non-diminishment standard" in the Florida Constitution. That standard prevents districts from being drawn that will diminish the ability of minority voters to elect candidates of their choice.

But in a five-page order Thursday, the Supreme Court said advisory opinions to the governor are typically limited to narrow questions and described DeSantis’ request as "broad" and containing "multiple questions that implicate complex federal and state constitutional matters and precedents interpreting the Voting Rights Act of 1965."

"While this court acknowledges the importance of the issues presented by the governor and the expressed need for quick resolution and finality, history shows that the constitutionality of a final redistricting bill for all congressional districts will be subject to more judicial review through subsequent challenges in court," the order said. "Moreover, the governor’s request might necessitate fact-intensive analysis and consideration of other congressional districts, not just District 5."

In a statement Thursday, Lawson commended the court for the denial of an "an advisory opinion on whether lawmakers could legally remove one or more minority-access seats from Florida’s congressional map."

"Ron DeSantis wanted the Supreme Court to violate the separation of powers and engage the judicial branch in partisan politics," Lawson said. "They wisely and correctly rejected his request. Yes, Ron DeSantis lost today, but more importantly, democracy and the Constitution won."

Hours after the court ruling, the House released a congressional map proposal that would maintain a design for District 5 running from Jacksonville to the west of Tallahassee. But it also would shift districts in Central and South Florida, which could boost the number of Republicans in the congressional delegation from 16 to 18, based on voting patterns in the 2020 election.

DeSantis' proposal, while different, also could give Republicans 18 seats.

Florida’s congressional seats are increasing from 27 to 28 this year because of population growth over the past decade. The House, like the Senate, appears poised to put the new seat around Polk County. The Senate proposal might increase the Republican seats in the delegation to 17.

The House Congressional Redistricting Subcommittee will take up the House’s proposed map on Feb. 18.