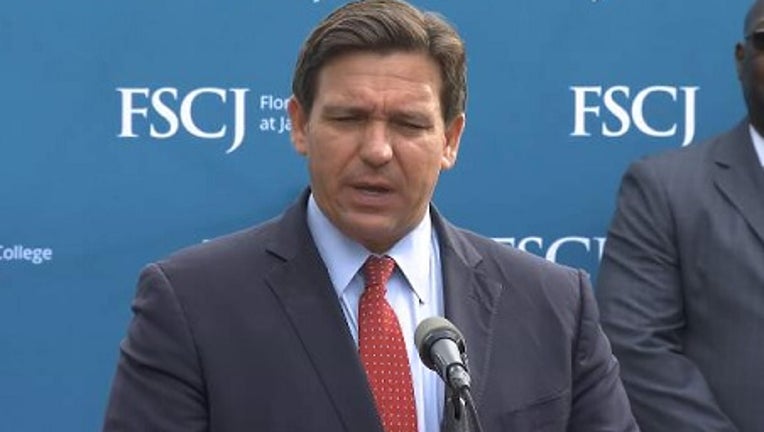 TALLAHASSEE, Fla. - The Florida Supreme Court on Thursday denied a request by Gov. Ron DeSantis for an advisory opinion about his proposal to revamp a sprawling North Florida congressional district that has been held by a Black Democrat.

The governor’s office quickly said it accepted the decision. Meanwhile, House Speaker Chris Sprowls, R-Palm Harbor, said the House now will "unpause" its map-making and that the Congressional Redistricting Subcommittee will reconvene next week.

Sprowls also said he expects to maintain North Florida’s District 5 close to its current layout, which goes from Jacksonville to west of Tallahassee. DeSantis proposed redesigning the district, which is held by U.S. Rep. Al Lawson, D-Fla., so that it would not stretch across the region.

In a five-page order, the Supreme Court said it "respectfully" denied DeSantis’ request. It said advisory opinions to the governor are typically limited to narrow questions and described DeSantis’ request as "broad" and containing "multiple questions that implicate complex federal and state constitutional matters and precedents interpreting the Voting Rights Act of 1965."

"While this court acknowledges the importance of the issues presented by the governor and the expressed need for quick resolution and finality, history shows that the constitutionality of a final redistricting bill for all congressional districts will be subject to more judicial review through subsequent challenges in court," the order said. "Moreover, the governor’s request might necessitate fact-intensive analysis and consideration of other congressional districts, not just District 5."

The justices said they did not have information on a functional analysis of statistical evidence, such as the voting ages of minority populations and election results.

"While we were hopeful the Supreme Court would provide clarity to legal questions surrounding the maps that are under consideration, we agree with the court’s opinion that there are important issues that must be addressed quickly," DeSantis spokeswoman Taryn Fenske said in an email. "We look forward to working with the Legislature to finalize a new congressional map for the 2022 election."

The Senate has passed a congressional map that generally would keep the current design of District 5, which was drawn in the past to help elect a minority candidate. But the House paused its efforts to pass a congressional map after DeSantis’ request for an advisory opinion.

Ultimately, the House and Senate will have to agree on a congressional map, which then will go to DeSantis, who has veto power.

DeSantis proposed making District 5 more compact and only in Northeast Florida. He also has pitched redrawing the Orlando area’s Congressional District 10, which is represented by Val Demings, a Black Democrat.

Under DeSantis’ proposal, the number of Republicans in Florida’s congressional delegation could increase from the current 16 to 18. The Senate proposal could give Republicans 17 seats.

In a Feb. 1 letter to Canady seeking the advisory opinion, DeSantis focused, in part, on what is known as a "non-diminishment standard" in the Florida Constitution. That standard prevents districts from being drawn that will diminish the ability of minority voters to elect candidates of their choice.

In a statement Thursday, Lawson commended the court for the denial of an "an advisory opinion on whether lawmakers could legally remove one or more minority-access seats from Florida’s congressional map."

"Ron DeSantis wanted the Supreme Court to violate the separation of powers and engage the judicial branch in partisan politics," Lawson said. "They wisely and correctly rejected his request. Yes, Ron DeSantis lost today, but more importantly, democracy and the Constitution won."

The groups Common Cause Florida, Fair Districts Now and All On The Line Florida and South Florida Democratic Congresswoman Sheila Cherfilus-McCormick submitted briefs opposed to DeSantis’ request, including arguing that it was an "ill-conceived attempt to hijack" the redistricting process.

Lawmakers have signed off on proposed new state House and Senate districts. Those maps await review by the Supreme Court.