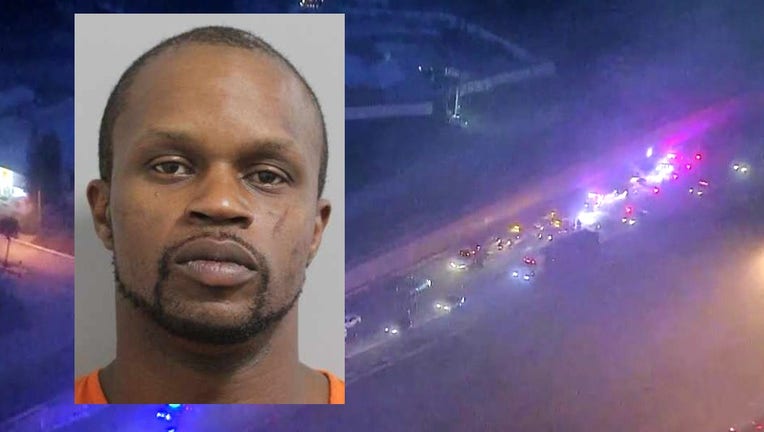 POLK COUNTY, Fla. - More is being learned about the biker gang shootout that played out on Interstate 4 (I-4) early Friday morning.

The shooting left a 33-year-old woman from Brevard County dead.

Polk County deputies have not released her name, but the biker she was riding with is now facing a felony murder charge.

"All evidence indicates at this moment he started the shooting," said Polk County Sheriff Grady Judd.

Deputies said the man is Ronald Donovan, 38, who has affiliation to the infamous Sin City Disciples biker gang.

The gang was the focal point of a 2019 Amazon Prime documentary. Their motto is "Death before Dishonor".

"We had bullet casings from three different firearms scattered over half-mile," Judd said.

Donovan will add felony second-degree murder, attempted first-degree murder, possession of a firearm by a convicted felon, tampering with evidence, two counts of resisting with violence, and two counts of battery on a law enforcement officer to his long criminal record.

Most of his past is littered with minor or criminal traffic violations. He recently served two years of probation for a DUI that occurred back in 2017.

Those who say they knew Donovan growing up say he came from a good home and that his mom was no-nonsense. They never expected things to turn out like this.

"It definitely gives me the wrong impression of what most of the motorcycle community is about," said Jay Wilde.

Wilde is a part of the I-4 Riders of Central Florida. It's a group that bikers who bring awareness to charity causes. He says what happened on I-4 that morning is not indicative of the biker community.

"A majority of your riders, including your three patch wearers, are people who just enjoy riding together, who look for brotherhood and sisterhood and camaraderie, and enjoy being out there," Wilde said.

FOX 35 went to Donovan’s last known address in Cocoa Beach for comment on his arrest but no one at home came to the door.

"These bikers are prevalent like any other gang. They have turf and territory," said former law enforcement detective James Copenhaver. "In this case, it was my understanding that both bikers were wearing their colors, which means a patch jacket signifying a gang that they're in."

Law enforcement experts say biker gangs that veer toward illegal activity are well known to authorities like any other street gang.

"If I was in the intelligence community right now, I’ll be looking for informants to try to get my finger on the pulse to see if there’s any retaliation being planned," Copenhaver said.

The incident occurred on the eastbound lanes of I-4, near the U.S. Highway 27 overpass around 12:15 a.m Friday.

Donavan was riding his motorcycle with his 33-year-old girlfriend on the back.

Deputies say they believe Donovan opened fire on a rival biker gang called "Thug Riders" after they passed him on the highway.

Donovan struck one of the Thug Riders in the back. That victim returned fire striking and killing Donovan’s girlfriend, officials said.

Both Thug Riders are cooperating with deputies as they continue to investigate.