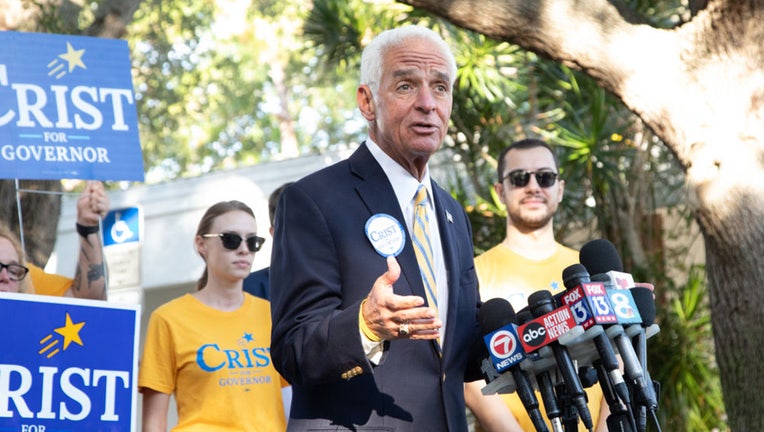 FILE - Charlie Crist, Democratic gubernatorial candidate for Florida, speaks to members of the media before casting a ballot at a polling location in Saint Petersburg, Florida, US, on Tuesday, Aug. 23, 2022.  (Tristan Wheelock/Bloomberg via Getty Images)

TALLAHASSEE - Charlie Crist announced that is he is resigning from his position as U.S. Representative for Florida’s 13th Congressional District to focus on his race to become the state's next governor.

His resignation will be in effect at the close of business day on Wednesday. Staff for the Office of the 13th Congressional District of Florida will continue to provide casework and constituent services until representatives for the newly redistricted 13th and 14th congressional districts of Florida are sworn-in in January.

In an emailed statement, Crist said the following:

"Serving as the Representative of Florida’s 13th Congressional District has been an honor and a privilege. When I first took office nearly six years ago, I vowed to defend our Veterans, bring jobs to Florida, fight climate change, and put people over politics. As I close out my time in Congress, I could not be prouder of the work we’ve done to uphold those promises – passing legislation to support our veterans, expanding solar energy in the Sunshine State, securing millions in direct funding for community projects, and returning over $6 million in earned benefits to the people of Pinellas.

"But these achievements start and end with you, the people – my bosses – who have guided my work in Congress since Day One. From the bottom of my heart, thank you for trusting me as your Representative in Washington. And God Bless the great people of Florida’s 13th Congressional District."

Crist will face off in November against current Florida Governor Ron DeSantis. On Wednesday, Crist posted a campaign video to Twitter, saying: "Beating Ron DeSantis won’t be easy, but with your support, we will win."

Crist won the Democratic nomination for governor in Florida during the primaries, defeating Nikki Fried, the state agriculture commissioner.

The 66-year-old has already served one term as governor, running as a Republican at the time before gravitating toward Democrats. His moderate stances could appeal to voters in Florida's teeming suburbs as Democrats seek to reverse a losing pattern in a state that was once seen as a perennial political battleground.